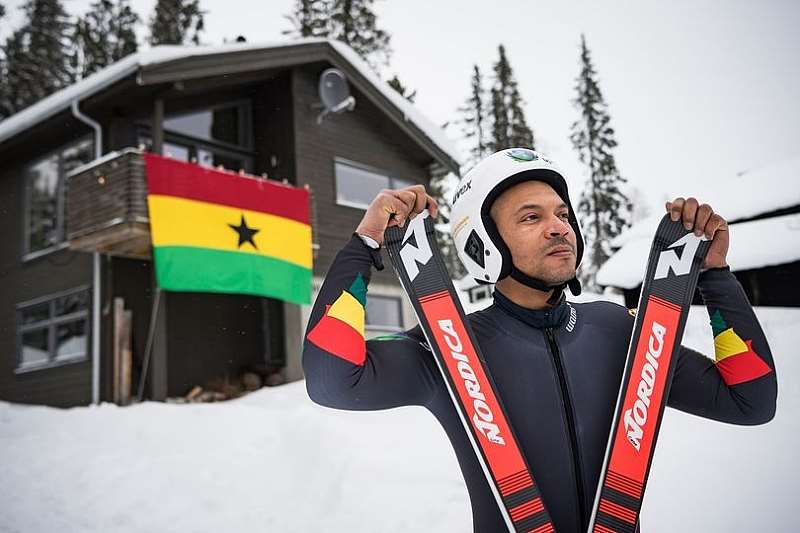 Six athletes will represent five African countries at the Beijing 2022 Winter Olympics scheduled to start on February 4, 2022, three nations less than in PyeongChang 2018. They will all participate in the skiing disciplines and Madagascar has the most athletes (2). A record eight African nations featured in the PyeongChang 2018 Winter Olympics.

NIGERIA
SAMUEL IKPEFAN – CROSS-COUNTRY SKIING Thanks to Samuel Uduigowme Ikpefan, Nigeria’s flag will be hoisted at the Winter Olympics for the second time in a row. Born on the 19th of December 1991 in Annemasse, France to a French mother and a Nigerian father, Ikpefan will become the first male to represent Nigeria at the Winter Olympics and the first ever to represent the country in skiing.

Growing up, the 30-year old participated in a variety of sports like swimming, judo, tennis and football before deciding at the age of 16 to build a professional career in cross-country skiing. He progressed through the French system, won national titles, but took a break after he couldn’t make the French team in 2011.

Thanks to his dual nationality, Ikpefan relaunched his career as a cross-country skier. He obtained a Nigerian passport in 2018 and travelled to Nigeria for the first time in his life in 2019 on invitation from the Nigeria Ski Federation, which wanted to test his resolve. Ikpefan took part in a demonstration at the National Stadium in Abuja with his roller skis and he got the green light to represent Nigeria at FIS tournaments, albeit at his own expense. So he is always on the lookout for sponsorships and he also set up a crowd funding campaign ahead of Beijing 2022.

He has already made history as the first skier to wear the colours of Africa’s most populous country at the World Cross Country Ski Championships and World Cup in the 2020/2021 winter season.

Ikpefan is from a family of athletes. His younger brother, Daniel, and sister, Cécile, both play rugby professionally in France.

MIALITIANA CLERC – ALPINE SKIING After becoming the first Malagasy woman to compete at the Winter Olympics four years ago at age 16, Mialitiana Clerc will be making her second consecutive appearance at Beijing 2022. At PyeongChang 2018 the alpine skier also made history as Madagascar’s youngest ever flag bearer at an Olympic Ceremony before going on to finish 47th in the slalom, and 48th in the giant slalom – amongst over 80 competitors.

Born on 16 November 2001 in Ambohitrmanjaka, Madagascar, Mia, as she is fondly called, was adopted by a French couple when she was one-and-a-half years old. She grew up in the Haute-Savoie region of the French Alps and began skiing at three years old. Her first competition was at nine years old, and she got her first medal in skiing at 10 years old. As she progressed in the sport, she joined the Inter Club Magland Desert Blanc.

A year after PyeongChang 2018, Clerc made her debut at the World Championships in Are, Sweden and became the first African woman to qualify for a second run in both her events. She recorded a series of impressive results, including four first-place finishes, in the South American Cup circuit and FIS events in Argentina. She has also featured in National Junior Championships as well as European and World Cup races in the build up to Beijing.

With the experience garnered so far, Clerc, who underwent a surgery on a fractured leg in January 2021, is now looking to make a mark in Beijing. “I now have more experience; I know how to react. I feel less stressed about races and worry less about how I’m going to ski tomorrow,” she told Olympics.com. “I know more things than [I did] four years ago because then I was kind of just starting [top-level] skiing…I was just entering the world of skiing with the best skiers.”

MATHIEU NEUMULLER – ALPINE SKIING Born on 12 December 2003 in France, alpine skier Mathieu Neumuller made his debut in an FIS-recognised race on 11 January 2020 in La Plagne. He went on to feature in several competitions including three World Cup events in France. He is the second male Olympic skier from Madagascar, after Mathieu Razanakolona who competed in the 2006 Olympic Winter Games in Turin. His request for a change of nationality from France to Madagascar was approved by the International Ski Federation in June 2021.

In addition to being an athlete, the 18-year-old member of French club SC Deux Alpes is also a film maker and is studying to obtain his ski instructor’s diploma.

He will be Madagascar’s flag-bearer in Beijing. His father, a ski instructor, has been helping and coaching him since he was just three years old.

“In Beijing, I aim first of all to exceed my current performance and have a good ranking among the best. What would be exceptional would be finishing in the top 30,” Neumuller told Olympics.com.

MOROCCO
YASSINE AOUICH – ALPINE SKIING The 31-year-old Yassine Aouich is Morocco’s sole representative at the Beijing 2022 Winter Olympics and he will feature in alpine skiing. His first FIS event was on 12 February 2011 in Spain and he made his World Championships debut in Are, Sweden in 2019. He also participated in the 2021 World Championships in Cortina d’Ampezzo, Italy.

Aouich was born on 17 November 1990 in Ifrane, a city in the Middle Atlas region of Morocco, which recorded the lowest temperature ever in Africa in 1935: −23.9 degrees Celsius. He will become the eighth athlete from Morocco to compete at the Winter Olympics.

CARLOS MAEDER – ALPINE SKIING His first FIS event was on 9 December 2017 in Italy and he made his World Championships debut in Are, Sweden in 2019. He is Ghana’s second-ever Olympic skier after the ‘Snow Leopard’ Kwame Nkrumah-Acheampong, who competed at Vancouver 2010.

Carlos Maeder was born on 23 October 1978 in Cape Coast, Ghana but was adopted by a Swiss family and grew up in central Switzerland.  “Thanks to my Swiss parents, who maintained contact with my mother, I have remained in touch with Ghanaian culture all my life. Today I travel as much as possible to Cape Coast to visit my big family there,” the ‘About Me’ page on his website states.

Maeder started skiing at age three and later joined the regional ski racing team. He was part of the U18 team of FC Lucerne and the regional youth selection.

He missed out on representing Ghana at PyeongChang 2018 Winter Olympics as his points were not enough to secure qualification. Those points however secured his participation in the 2019 World Ski Championships in Åre, Sweden.

ERITREA
SHANNON-OGBNAI ABEDA – ALPINE SKIING Nicknamed Shanaconda, Shannon-Ogbnai Abeda is representing Eritrea at the Winter Olympics for a second time in a row. Born and raised in Canada (his parents fled Eritrea in the early 1990s during its war of independence with Ethiopia), the 25-year-old made the decision to compete for Eritrea in 2011 when an opportunity to participate in the 2012 Winter Youth Olympic Games arose. Then six years later he made his senior Olympic debut at the PyeongChang 2018 Winter Olympics. Now he is set for Beijing 2022.

“I am excited to go again but more or less I am nervous this go around. After a brief hiatus and some reflection, I decided to come back as I did not feel I ended my career on the right note. My Olympic event will be the last of my career as an alpine skier and I will be transitioning into a full-time career,” he said during a Reddit AMA (Ask Me Anything) session.

The fresh graduate of Computer Science and General Business Management from the University of Lethbridge, who first learned how to ski in Fort McMurray, Alberta at the age of three but he fell in love with the sport in 2003, does contract software and video/photography work over the summer and fall to pay for his training fees.

When he was asked about the best moment in his winter sport career, he wrote: “Had to think hard about this one, but I have to do say the best moment in career was when I got cleared to ski again and qualified for the games after a near career-ending injury. Took me a year of rehabilitation and to have come back from it and defy my own expectations was probably the most fulfilling moment.”

He also has a soft spot Bobsleigh and is on a mission to pilot a bobsleigh team that will represent Eritrea at Milano Cortina 2026.