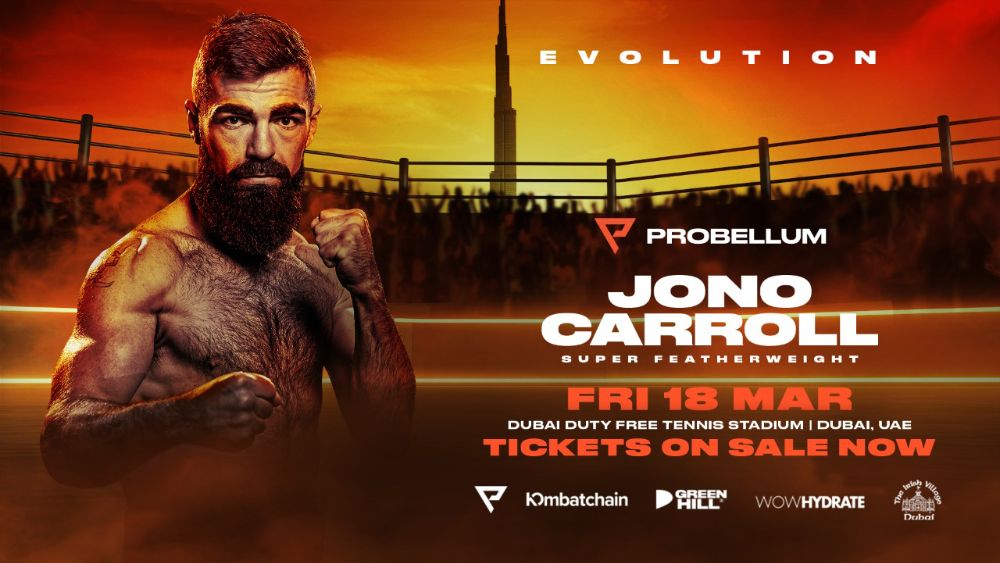 Jono Carroll will face Serif Gurdijeljac in the co-main event on the opening night of Probellum Evolution in Dubai next month.

Probellum’s first shows of 2022 take place at the Dubai Duty Free Tennis Stadium over consecutive nights, on March 18 and 19, featuring world title fights and some of the most talented boxers from across the globe.

The first night will be headlined by French fighter Estelle Mossely’s IBO world lightweight title match against Argentina’s Yanina del Carmen Lescano, and Carroll’s opponent for the supporting bout has now been confirmed, with the Irishman (21-2-1, 6 knockouts) set to face Serbian Gurdijeljac (21-6, 8 knockouts).

Carroll goes into the bout off the back of three consecutive victories, the most recent of which came at Probellum’s inaugural show at Dubai’s Coca-Cola Arena last December, when he produced an impressive performance to beat Brazilian Aelio Mesquita courtesy of a knockout.

Gurdijeljac, who turned professional in 2013, is a former IBF international champion and will be looking to get back to winning ways after suffering defeat in his last bout, against Frenchman Samir Ziani.

“Jono Carroll versus Serif Gurdijeljac is an intriguing contest and one which will excite fight fans watching Probellum Evolution,” said Richard Schaefer, President of Probellum.

“Jono has proven his quality on numerous occasions and will have his sights set on a world title shot in the future, while as a former champion, Serif has the expertise and experience to make it a great fight.

“The Dubai event will be a brilliant occasion and this is a fitting match up for the co-main event of our opening night.”

Ticket prices start from 50 AED and are available now via Platinum List or in-person at The Irish Village, Al Garhoud and Studio City.