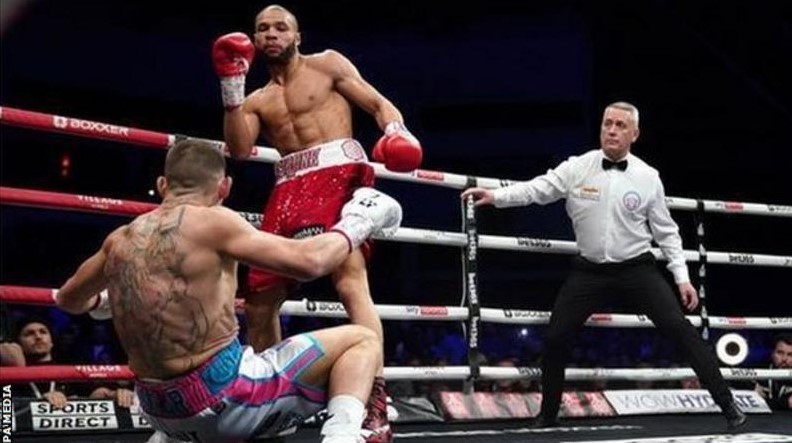 Chris Eubank Jr produced a dazzling display as he proved a class above Welshman Liam Williams to move closer to a world title shot in 2022.

Eubank had Williams on the canvas three times in the opening four rounds as he backed up his pre-fight confidence with arguably a career-best performance.

Williams showed tremendous heart and bravery to battle on but was again sent to the canvas in the 11th round.

“I am happy with the performance, I wanted to teach that man a lesson, he said some quite menacing things to me in the lead-up to this fight,” Eubank said.

“Headbutts, headlocks, I am surprised he didn’t get disqualified. But I took it like a man and I punished him like I said I would. It was a fun night.

“I think I showed some of my critics a different side to me. There was no danger, if I had stepped on the gas at any point in the fight he would have been gone.

“There are levels to this game. Don’t be a big mouth against guys you can get hurt against.”

Home advantage does not pay for Williams

This was the biggest indoor arena boxing show in Cardiff in over 20 years with the Motorpoint full to capacity for the first time since the heyday of one of Wales’ greatest ever, Joe Calzaghe, who drew the sold out signs for a WBO super middleweight title defence in 2001 against Mario Veit.

The atmosphere was electric in the Welsh capital with a live rendition of Delilah pumping the volume up to 11 in the first major boxing show of the year in the UK.

Eubank predictably entered the arena to a chorus of boos but seemed to relish his status as the bad guy in Cardiff as he looked calm and relaxed with Williams prowling and snarling throughout the pre-fight introductions.

An extremely cautious first round exploded into life when Eubank tagged Williams with a jab that caused the Welshman to lose his footing and take a standing count and things soon went from bad to worse for Williams.

His corner were massaging his left leg after the first round, but Eubank again dropped the Welshman in the second round as he produced a left hook that saw Williams’ legs buckle as his left leg appeared to completely give way.

To his credit Williams again answered the count and he enjoyed an even share of the third round before being rocked by a Eubank shot after the bell that angered his corner.

However, Eubank put Williams down again following a slick combination in the fourth as a weary Williams struggled to convince the referee not to wave things off.

Williams responded and improved in the middle rounds, but by then faced a mountain to climb on the scorecards.

Bigger days ahead for Eubank

This was a genuine grudge match after much trash talking ahead of the fight, with two fighters who clearly don’t like one another meeting to settle their issues, but the stakes were higher than that with the UK’s number one and number two-ranked middleweights meeting for the first time.

Both combatants knew the winner was almost certain to move onto bigger and better things in 2022 as two fighters who have fallen short on the biggest stage look to make amends with another world title opportunity.

Eubank and Williams both had everything to prove having fallen short in their biggest fights to date, but it is Eubank who can now look forward to a potential world title shot later this year.

In total control of the contest thanks to his succession of early knockdowns and slipping away from Williams’ biggest shots, Eubank taunted Williams throughout and again floored his opponent in the 11th round as Williams appealed in vain that he had slipped.

Eubank drew some boos for showboating in the final session, but there was no doubting he was a clear and decisive victor.

On the undercard there was some Welsh success as former British and Commonwealth welterweight champion Chris Jenkins returned to action with a comfortable 78-75 points victory over former world champion Julius Indongo, while stablemate Rhys Edwards was also victorious.