Jayson Tatum scores 38, Celtics rally past Hawks for 8th win in a row 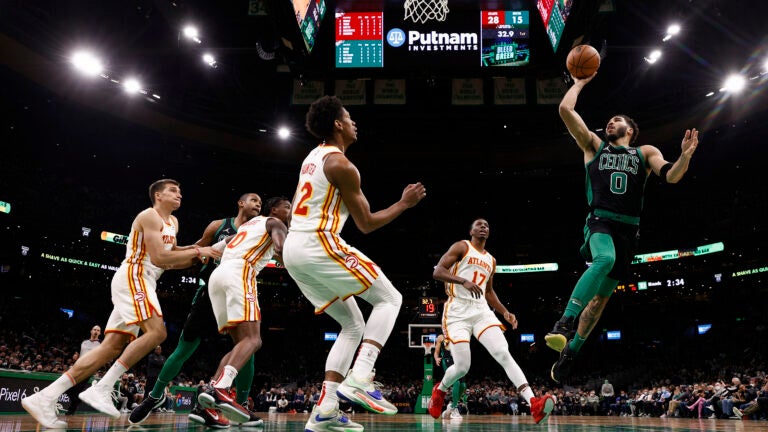 Jayson Tatum scored 38 points and led a third-quarter surge that sent the Boston Celtics past the Atlanta Hawks 105-95 Sunday for their eighth straight win.

Trae Young had 30 points and 10 assists to lead Atlanta, keeping the Hawks within range until the final few minutes of the fourth quarter. Bogdan Bogdanovic finished with 26 points and Clint Capela pulled down 17 rebounds for the Hawks, who lost for the fourth time in five games.

The Celtics, who lost their first two against the Hawks this season, trailed 55-45 at halftime and allowed an early basket by Young to start the third.

Boston responded with a 12-0 run and dominated the rest of the period. The Celtics made 13 of 18 shots in the third and outscored the Hawks 42-23. Tatum scored 16, hitting a pair of 3-pointers late in the period and adding a dunk with three seconds remaining to put the Celtics up 87-78.

Tatum wasn’t done. After the Hawks pulled within 89-84, Tatum hit a turnaround jumper, then another 3-pointer to stretch the lead back to 94-84 with 6:32 left and prompted the Hawks to call a timeout.

The break didn’t slow down Boston, which forced a miss by Young under the basket and got another 3-pointer by Grant Williams from in front of the Atlanta bench. The Celtics were able to hold a wide lead the rest of the way.

Hawks: F John Collins was out with a strained right foot that is expected to sideline him at least three games. Collins injured the foot Friday night against San Antonio and did not return. An MRI revealed the strain and Colins will be re-evaluated after a few days of rest, the Hawks said. … The Hawks successfully challenged an offensive foul called on Young with 1:55 left to play.

Celtics: Got off to a rough start from outside, making just 4 of 20 3-pointers in the first half. …Derrick White, playing in just his second game for Boston since coming over in a trade with San Antonio at the deadline Thursday, had 10 points in the first half and finished with 14.

Celtics: At Philadelphia on Tuesday night.