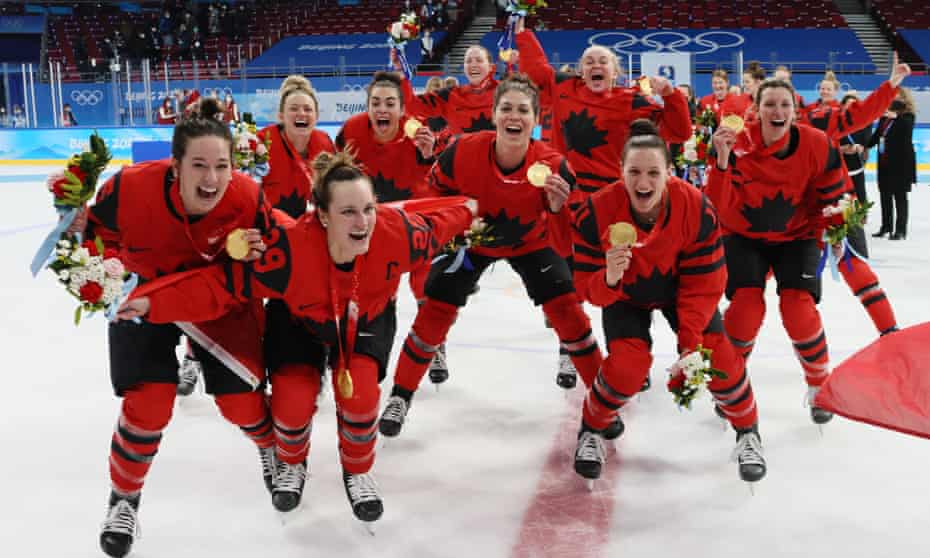 Canada regained their crown against old foe Team USA at the Wukesong Sports Centre in the final game of the women’s ice hockey tournament of these Olympic Winter Games Beijing 2022.

Unlike the 2018 final in PyeongChang – which required overtime and a shootout – tonight’s affair ended in three periods of regular time and 3-2 in favour of Team Canada.

It was the seventh time the two North American powers have met in an Olympic gold medal-game (all but one since the women’s competition debuted in Nagano in 1998). And the Canadians were dominant on the day as they sealed their fifth women’s ice hockey gold and unseated the U.S. in the latest chapter of this huge hockey rivalry.

“It’s just so good. It’s a great feeling. It was one hell of an effort. This is redemption,” said Marie-Philip Poulin, among Canada’s scorers in the final. Teammate Sarah Fillier added: “It’s insane. I can’t stop shaking. It’s a dream come true.

The Canadians opened the scoring in the eighth minute of the first period when Sarah Nurse bagged her fifth goal of these Olympics by deflecting a low crossing pass from Claire Thompson to beat USA goalie Alex Cavallini (1-0). The first goal of the game came just 35 seconds after the Canadians had a goal chalked off for offside.

Canada, who’d already bested their American neighbours 4-2 in the group phase, added another goal with five minutes to go in the first period. The U.S. were unable to clear the zone and 30-year-old Poulin – all-time leading scorer at Boston University and a four-time Olympian – stripped the puck and fired her shot to the right of a screened Cavallini (2-0).

The Americans picked up their tempo in the second period, but the Canadians – ruthless on the night – refused to take their foot off the accelerator. Poulin grabbed her second goal of the night in the 10th minute after a speedy transition play and an assist from Nurse, which saw her break the record for most points (18) and most assists (13) in a single Olympic women’s ice hockey tournament (3-0).

But the U.S., who’d picked up the tempo after their slow start, pulled one back. Four-time Olympian Hilary Knight, 32, raced up the ice with her team short-handed and got hold of her own rebound after an initial save from Ann-Renee Desbiens. That goal cut the Canadian lead (3-1) and gave the Americans hope heading into the third period.

Team USA came out fighting in the final period of the game — and they pulled another goal back with 12 seconds to go thanks to Amanda Kessel’s close-range effort (3-2). But it wasn’t enough to turn the tide of the day as Canada were worthy winners.

“That was the longest game of hockey I ever played,” said Canada’s Nurse — clearly relieved to hear the final whistle. “We knew we were going to end up with the gold medal when we woke up this morning. We just had to stick to our process. This is a dream come true.”

Team USA’s Knight was philosophical after the tense contest: “You obviously go into every tournament expecting and hoping to win, but we came up a little short and Canada was the better team tonight.”

The bronze medal went to Finland for the third time since the women’s competition debuted in 1998 after they shut out Switzerland 4-0 in yesterday’s contest from the Wukesong Sports Centre.