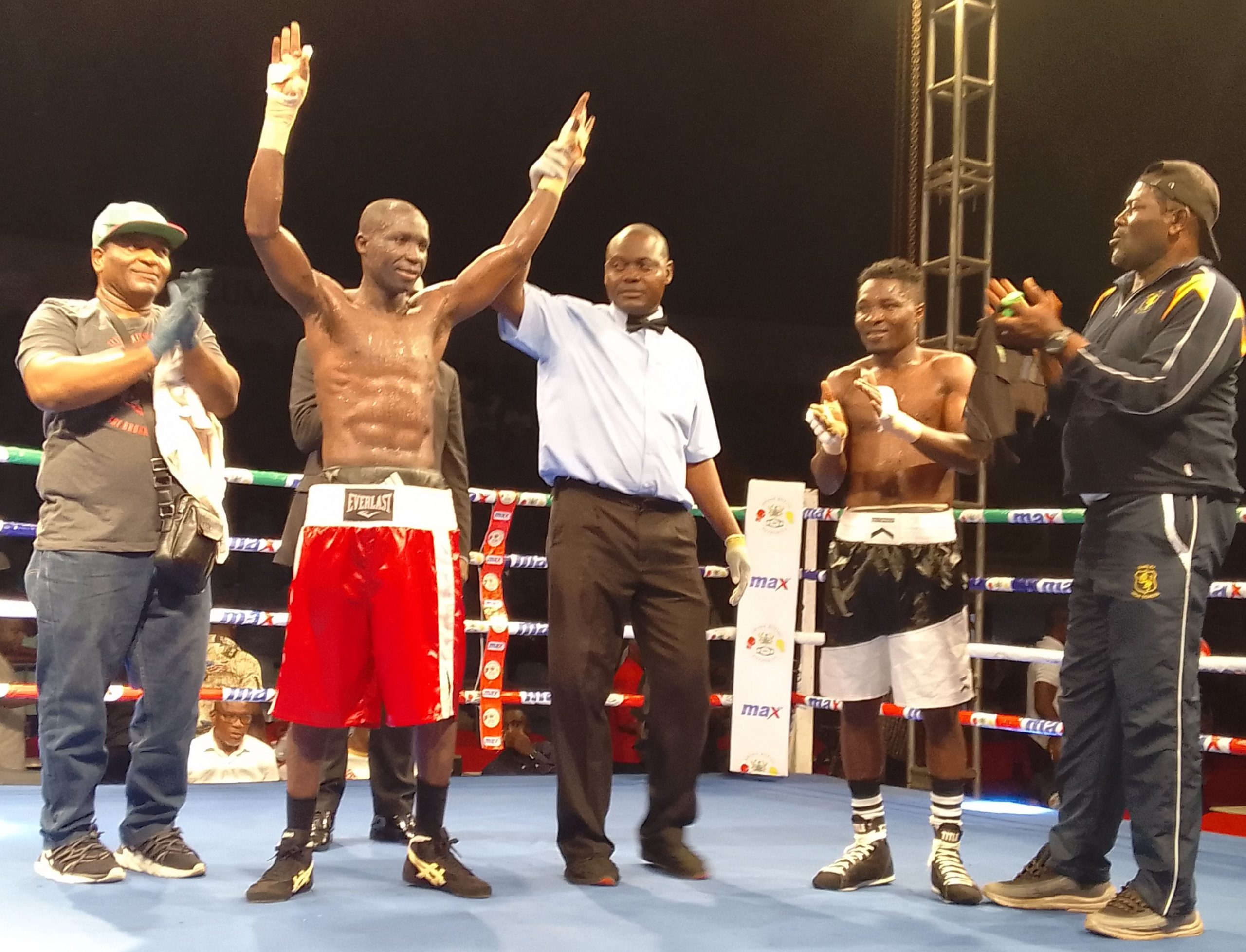 The league which returns after a sixteen year hiatus, has been in abeyance. It kept patrons and major players waiting with bated breath since even after it had been duly launched, there were a couple of postponements.

One for the album: Immediate past GBA President, Peter Zwennes with current executives

They greatly emphasized on its propensity to climax a certain renaissance in the Ghana boxing stratosphere.

Immediate past GBA capo – legal luminary and technocrat, Peter Zwennes observed that although he had initiated procedures to get the Professional Boxing League underway, its ultimate fruition ought to be credited to the ingenuity and prowess of his successor, Abraham Kotei Neequaye and his able team.

The maiden event which witnessed a massive turnout never failed to live up to its billing.

Isaac Sackey was first to win on the night and was rewarded a cash of 100 Euros by Sports Minister, Hon. Mustafa Ussif, same as defeated opponent, Isaac Taylor

Prince ‘The Buzz’ Larbie and Shark Dorissa thrilled fans present with scintillating displays, intermittently drawing applause from the vociferous crowd, to the admiration of Hon Ussif and Hon. Edwin Nii Lante Vanderpuye who took turns to dole out cash to the two juvenile boxers.

Then came Emmanuel Dekeh edging Michael Osunla by split decision in their light heavyweight duel whilst Adam Hab Deen Salanon did a quick work on Daniel Otoo, dispatching the latter in just two rounds in their flyweight encounter.

John Quaye got his opponent Stephen Addy perplexed with his unorthodox style, winning on points in a super lightweight contest before another super lightweight fray between Azumah Mohammed and Patrick Cudjoe ended in the first round with Azumah emerging the victor.

In the final bout of the evening, Michael Tagoe squared up against Alexis Kabore in a super bantamweight contest. In an all out war from the opening round, both pugilists stood toe to toe, exchanging heavy leather. But the bout ended abruptly after the sixth round of the scheduled eight when Michael Tagoe suffered a shoulder dislocation, enabling Kabore to clinch the win via TKO.

In what was an exhilarating opening night of the Ghana Professional Boxing League, Prince Larbie of Will Power Gym emerged the best boxer in the juvenile category taking home a standing fan donated by TCL while Emmanuel Dekeh making his debut annexed the coveted best boxer of the night accolade winning a 32 inch flat screen television set.

Drowned in tremulous drumming, singing and dancing from the Ghana Boxing Supporter’s Union, creating a perfect ambience for boxing, the first night can be adjudged a massive success… Guess your plate is titillated in earnest anticipation of subsequent editions.