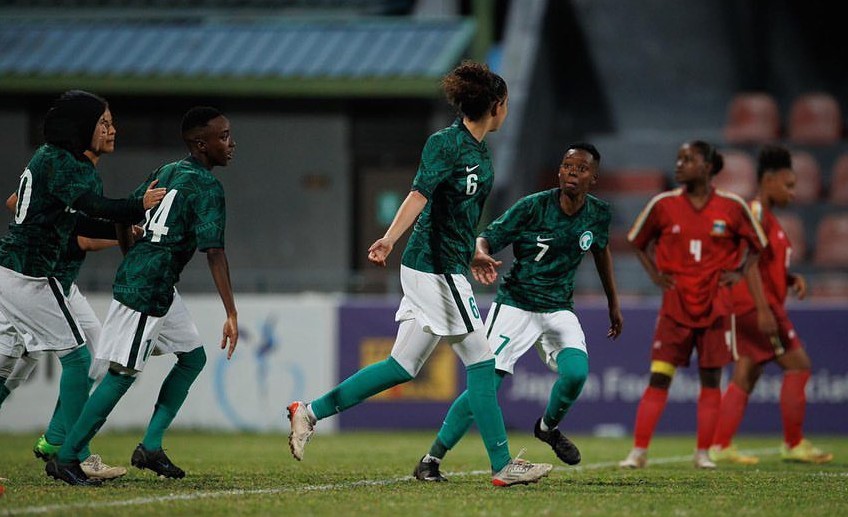 The Saudi Arabia women’s team won their first-ever FIFA recognised international match on Sunday, beating Seychelles 2-0. The team, established just last month, travelled to Maldives for a friendly mini-tournament and is now preparing for their second match against Maldives on Wednesday, February 24.

HISTORIC GOAL Saudi team took the lead just 14 minutes into the tie when Al-Bandari Mubarak found the back of the net. They went 2-0 up early in the second half when Maryam Al-Tamimi scored a penalty. Saudi Arabia’s German coach Monika Staab said after the game: “Our goal is for the players to gain the experience necessary to play international matches, in addition to our aim of making an official entry into the FIFA classification.” This fixture may not be the most glamorous but is considered as historic. Perhaps when the female Falcons appear at future World Cups and Asian Cups, as the plan is to qualify within the next decade according to officials from Saudi Arabia Football Federation (SAFF), these games will be looked at as hugely significant.

MONIKA STAAB HISTORY Women’s coach Monika Staab led FFC Frankfurt to the 2002 UEFA Women’s Champions League title. Now 63, the former midfielder was appointed to take charge of the Saudi women’s team last August. Despite a resume that includes spells in Qatar and Bahrain, this job is a new experience for the coach as well as for the players, and she had a message for them on Friday: “Enjoy every single minute, every second that you will experience in that historic moment,” Staab said. “Be proud of being part of the squad of 25. Try your best and give everything for Saudi Arabia. It is an honour for you to be there. Take this opportunity, as this is one of the most historic moments in women’s football in Saudi Arabia.”

THE CALL FROM SAFF “In November last year, my phone rang, and I saw that it was a +966 country code and had no idea who it was,” Coach Staab said. “I thought to myself: ‘Come on, what have you got to lose?’ And then the person said: ‘This is the Saudi Arabian Football Association. We’d like to bring you over for our first C-license coaching course for women.’ I thought: ‘Sorry, what? Saudi Arabia?’ I thought that nothing could ever surprise me, and then this came along. They asked if I could give the coaching course in December, and I said: ‘Count me in.’”

FOOTBALL DEVELOPMENT LAUNCHED Saudi Arabia’s first Department of Women’s Football Development was set up in 2019 and in that year, as well as 2020, there were domestic competitions set up. In November last year, the new Regional Football League kicked off, which involved 16 teams split across three regions: Central, Western and Eastern, with six teams based in the first two and four in the east. According to Staab, the hunt for national team players began last September and a camp was organised for this purpose.

SAUDI FIRST WOMEN’S LEAGUE The 16-team tournament Saudi Women’s League has made a big difference. While giving the players somewhere to train, play and develop, it gave Staab a great chance to look at the talent on offer before holding a training camp earlier this month. “The establishment of the first official Saudi league through the regional league and then the Kingdom’s championship had a major role in the selection process,” Staab said.

The Saudi Arabian women’s national football team have landed in the Maldives ahead of their first ever international match. (Photo by: Saudi Arabia Football Federation)

PROMISING PERFORMANCE  Coach Monika spotted some talents in the league like Seba Rabea Tawfiq, a star of the Jeddah Eagles who reached the semifinals in the first regional league season. “I hope that women’s football will move forward in Saudi Arabia in general and that women will be able to play football abroad, just like the men’s teams,” Seba said. “If God wishes, we will make progress as female players and represent our home country like women elsewhere. Then, football will become ordinary for girls as it is for boys.”

Seba continued: “And it may become ordinary for the women, like the men, to take on the best in Asia and the world in the big tournaments. Lamia Bahian, head of women’s football at the SAFF, had a message for girls who play football or aspire to: “Dream big, play with passion and put your heart on the field and into training,” she said. “There will be a lot of challenges along the way, but football is one of the greatest things that will ever happen to a girl or a woman. Growing up playing football, I believe, added so much to me, personality-wise, character-wise, on-field, off-field. So, just go out there and take the ball.”

PELE’s CONGRATULATORY MESSAGE The Saudi Arabia women’s team after winning their first-ever match received a message from football legend Pele. He wrote: “I want to congratulate the [Saudi Arabia Football Federation] and their Women’s National Football Team for their first official [FIFA] match.”

“Today is a historic day not only for you, but for everyone who loves football.”