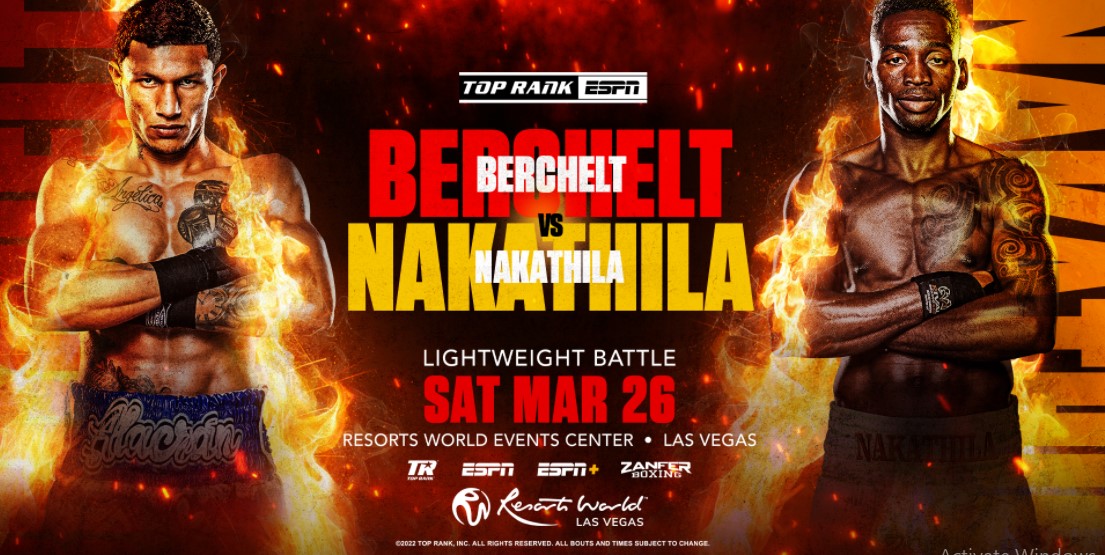 Berchelt-Nakathila marks the debut sporting event at Resorts World Las Vegas, which opened June 2021 as the first integrated resort to be built on The Strip in over a decade.

Promoted by Top Rank, in association with Zanfer Promotions, tickets starting at $25 go on sale Thursday, March 3 at noon PST, and can be purchased at www.rwlasvegas.com/experiences/top-rank.

“Miguel Berchelt is motivated to become a two-weight world champion, and he has a formidable test in his lightweight debut against Jeremiah Nakathila,” said Top Rank chairman Bob Arum. “It is a great honor to promote the first boxing event at Resorts World Las Vegas, a fantastic new property we hope will host many fight nights in the coming years.”

Berchelt (38-2, 34 KOs) won the WBC world title in January 2017 and defended that belt six times, becoming one of boxing’s longest-reigning world champions. Five of his title defenses came by knockout, including a ninth-round triumph over Miguel Roman and a fourth-round blitzing of former world champion Jason Sosa. Berchelt’s momentum was halted in February 2021, when he lost his world title in a dramatic showdown against Oscar Valdez. Berchelt was knocked out in the 10th round by Valdez and soon looked to regain his championship form in another division.

“I am ready to turn the page and show the fans I have what it takes to become a two-division world champion,” Berchelt said. “The Valdez fight is in the past, and my focus is on Nakathila and a lightweight world title in 2022. ‘El Alacran’ is back, and I can’t wait to come to Resorts World Las Vegas to put on a show.”

Nakathila (22-2, 18 KOs) is a former WBO Africa and WBO Global junior lightweight titlist who is one of Namibia’s most decorated fighters. He went undefeated for more than four years, and last June, he made his Las Vegas debut against Shakur Stevenson for the WBO interim junior lightweight world title. Nakathila lost a clear points verdict to the unbeaten phenom, but he returned in fine form last October with a second-round stoppage over Ndodana Ncube. The 32-year-old Nakathila hopes to score the upset and a spot among the lightweight elites.

Nakathila said, “It’s an amazing opportunity to fight Berchelt. Given our styles, it will make for a highly entertaining fight. This is my lightweight debut, and I’m looking forward to my first win against a highly rated former champion.”

Vivas (21-1, 11 KOs), from Texcoco, Mexico, has won four straight fights and emerged as a contender to watch during the “Bubble” in 2020 with standout performances against Carlos Jackson and John Vincent Moralde. Last May, in one of the year’s best toe-to-toe affairs, he recovered from a pair of third-round knockdowns to edge Louie Coria by unanimous decision. Baez (20-2-2, 7 KOs), from Mexicali, Mexico, is a former Mexican junior featherweight champion who is now testing the featherweight waters. Last March, he notched a one-sided decision over the previously undefeated Abimael Ortiz, which came a little more than three months after a near-shutout verdict over Narek Abgaryan. Baez saw his 12-bout unbeaten streak snapped with a razor-thin majority decision loss to Ra’eese Aleem.