Star-studded Lakers are fighting just to make the playoffs 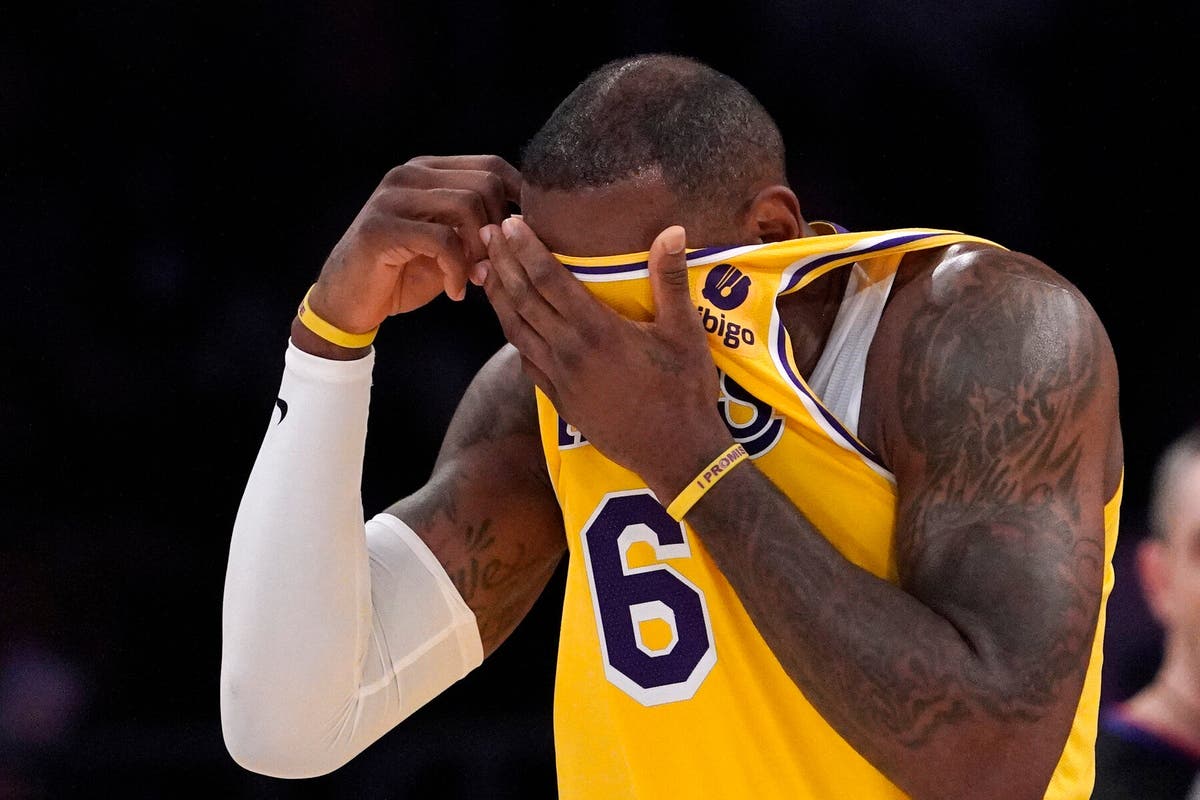 The Lakers are on the verge of missing the N.B.A. playoffs. Their fans are booing and heckling them at home. They haven’t won since the All-Star break. They’ve won only three games out of their last 13.

After their most recent outing, a 109-104 loss to the Dallas Mavericks on Tuesday night, LeBron James sounded defiant.

“Until you stump me out, cut my head off, bury me 12 feet under, then I got a chance,” James said, his voice echoing in a cavernous portion of the arena. He added: “As long as we’ve got more games to play, we still have a chance. So that’s my confidence. I hate losing. I feel like poop right now. But tomorrow is a new day and I’m going to be prepared and ready for the Clippers on Thursday.”

How firmly James truly believes that is unclear, but what he said reflected perfectly the Lakers’ situation. At 27-34, with the ninth-best record in the Western Conference, they still have a chance to make the playoffs. Technically, they have a chance to try to win another championship, however unrealistic that might be.

“We’ve got a resilient group,” Coach Frank Vogel said. “We have two guys, three guys really, top 75 all time. We’re hoping to get the other one back. Young guys are playing their tails off and bringing great energy to our group. We’re doing enough in stretches to give us belief; we just haven’t been able to close out the last two games.”

This is not what the Lakers envisioned for this season. A combination of injuries and a poorly constructed roster have led to their fighting to be seeded into a play-in game to get into the playoffs.

After a first-round exit in last year’s playoffs, they traded for Russell Westbrook, who they thought would offer superstar caliber play. Instead, Westbrook, whose acquisition James supported, has struggled on a team that cannot constantly feed him the ball.

His obvious bad fit caused the Lakers to lightly explore trading him before last month’s deadline, but without the assets to make his inflated contract appealing to another team, they opted to wait until at least the summer to make any moves.

James, who has been known during his career to make coded remarks, raised eyebrows when he praised the Los Angeles Rams’ general manager, Les Snead, after the Rams won the Super Bowl, then praised the Oklahoma City Thunder’s general manager, Sam Presti, when asked an innocuous question about one of his players at an All-Star Weekend news conference. Some read his remarks as veiled criticisms of the Lakers’ front office.

James then told The Athletic that he hadn’t closed the door on returning to Cleveland, leading to a mountain of speculation about whether the marriage between James and the Lakers was effectively over.

In hindsight, it clearly isn’t. In the week after the All-Star Game, James insisted too much was being made of his comments. Vogel referred to them as “just noise.”

James’s agent, Rich Paul, met with Rob Pelinka, the Lakers’ vice president for basketball operations, and Jeanie Buss, the team’s governor and chief executive, to assure them James was committed to being a Laker, according to multiple people with knowledge of the meeting.

As the agent for the most important current Laker in James and the second most important in Anthony Davis, Paul has built a close relationship with Pelinka and Buss. Their conversation last week helped to soothe potential rifts borne of the frustration that comes with such a disappointing season.

In the week since, the Lakers and their biggest star have all presented a face of unity and harmony.

What that meeting could not do, though, was change what was happening on the court.

Davis has been out with a foot sprain since Feb. 16. In all, he has missed 24 games this season. James has missed 17. The last time James, Davis and Westbrook played in the same game together was in Brooklyn on Jan. 25.

They won that game, but even together they have challenges. Westbrook has not played well enough to justify the more than $90 million he is owed over the final two years of his contract. What the Lakers have committed to him has also hamstrung their ability to build depth that might have helped weather the injuries they’ve faced.

LeBron James tried to make something happen against Luka Doncic and the Mavericks.Credit…Gary A. Vasquez/USA Today Sports, via Reuters

And so the Lakers have found themselves here.

On Sunday night, they were booed loudly by a fed-up crowd watching a lackluster effort against the New Orleans Pelicans. They lost to the Pelicans, who went into their game on Wednesday night with a 25-36 record and tied for 10th place in the Western Conference.

They heard boos on Tuesday against the Mavericks (37-25), mostly as they fell to a 21-point deficit in the second quarter. A third-quarter rally brought back cheers briefly, and an energy rarely felt in their home arena lately.

Tuesday’s game was such an improvement over Sunday’s 28-point loss to the Pelicans that the idea of a moral victory was broached to James after the game. He found the words so repugnant he could not let them go uncontested.

“No,” James said, then each subsequent word sounded a bit more urgent than the last. “No. No. No. No.”

Without the ability to make any real changes, the Lakers can only cling to the hope that maybe they will be healthy in time to change their fortunes during the playoffs.

Last year, the N.B.A. introduced a play-in tournament before the playoffs in which the seventh seed in each conference played the eighth seed, and the ninth seed played the 10th. The two winners went on to enter the 16-team playoffs. In the past, the league had just let in the top eight teams in each conference.

James bristled last season that his seventh-seeded Lakers had to participate.

This season, the play-in tournament might offer a lifeline. But only if they can get there.

The Lakers have the ninth-best record in the Western Conference. Entering Wednesday night’s action, they were only two games ahead of the 11th ranked Portland Trail Blazers.

“If we win games, it gets us in,” James said. “We’re going to prepare. We’ll be ready. But we got to try to win one basketball game right now.”

All anyone involved with the Lakers can do now is make the best of their reality.