Golovkin wants the smoke to clear before discussing Canelo trilogy 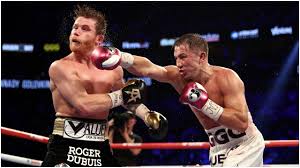 IBF, IBO middleweight champion Gennady Golovkin would embrace the scenario of once again fighting in the UK at some point.

Golovkin fought on UK soil back in 2016.

He was initially scheduled to face Chris Eubank Jr. – but their negotiations fell apart, with Eubank being replaced by then welterweight champion Kell Brook, who moved up by two weight classes. Golovkin would break down and stop Brook in five rounds.

For the moment, Golovkin is only interested in fighting in the United States.

“Of course, the United Kingdom is one of the top markets and it has always been on my radar. But everything will depend on my offers I might receive on the terms and conditions of those offers,” Golovkin told The Sun.

“But secondly, let’s be honest; right now everyone wants to be in the United States, it’s considered the top. Of course, the United Kingdom can offer terms comparable to the US’ proposals’.”

Ironically, Golovkin’s next fight will take place in Japan.

On April 9, Golovkin will travel across the ocean to collide with WBA champion Ryota Murata in a high stakes unification.

Should Golovkin win, he will then be in line for a trilogy fight with undisputed super middleweight champion Saul ‘Canelo’ Alvarez – which is going to take place in September.

Golovkin says it’s too early to discuss the third fight with Canelo – because they both have upcoming assignments. Golovkin has to overcome Murata next month – and Canelo is taking a big risk when he moves up in weight to challenge WBA light heavyweight champion Dmitry Bivol on May 7th in Las Vegas.

“It’s premature to have a discussion, there’s too many ‘ifs’. If one fighter beats the other fighter and so on. Let’s wait till May, let’s wait till our fights are behind us, then we can discuss and we’ll have a better understanding of what’s going on,” Golovkin said.