Dmitry Bivol: I just need to do my job and I will beat Canelo Alvarez, advice he got from Sergey Kovalev 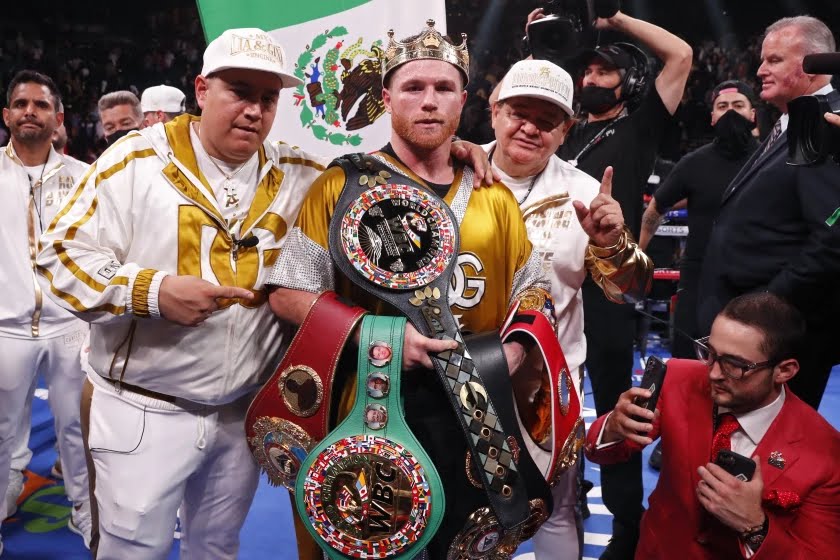 Canelo Álvarez poses with his trainers and his championship belts after defeating Caleb Plant on Saturday.(Steve Marcus / Associated Press)

Dmitry Bivol was in the house at Saturday night’s DAZN show in Los Angeles, as he nears his May 7 DAZN pay-per-view main event against Canelo Alvarez.

Bivol (19-0, 11 KO) will be the one with a title on the line that night, as he defends the WBA light heavyweight belt against undisputed super middleweight champion Canelo (57-1-2, 39 KO), but he’ll also be the underdog and the clear B-side.

But those who have seen Bivol fight know he’s got plenty of skill, and shapes up to be one of Canelo’s toughest tests to date on paper. And he wasn’t lacking for confidence when discussing the bout.

On what he can do against Canelo that others couldn’t

On the keys to beating Canelo

“To be honest, I just need to do my job, what I do best. It’s a good jab, good movement, and sometimes more pressure, sometimes go back. Everything I can do. If I do it well, I will win. I believe it.”

On advice he got from Sergey Kovalev

“He said, ‘This is just a man, just a boxer. He’s not something else. Think about him like another opponent.’”