Fraser-Pryce produces one of several world leads in Nairobi 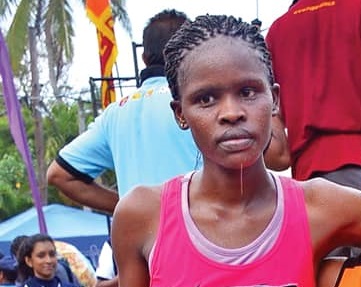 Former Nantes Marathon winner Emily Jepkoech has arrived in Ghana for the third edition of the Kwahu Mountain Marathon.

The top Kenyan athlete arrived at the Kotoka International Airport on Wednesday and she is set to compete for the ultimate $2,000 cash prize.

This year’s 21-kilometre marathon organized at the behest of Kwahu Traditional Council will witness over 1,000 athletes compete at the race which would begin from Nkawkaw and end at Mpraeso.

In an interview after her arrival, Jepkoech was very confident of winning the top prize despite claiming that it would not come easy.

“This is my first time running in Ghana and it would be very difficult considering the weather and other factors. But I am very confident to win the race and also delighted to honour this major race in Ghana,” said the 33-year-old runner.

Jepkoech also noted that she wants to use the Kwahu Marathon for future races set to take place in Europe later this year.

She has over the years competed at major marathons around the world including Cannes Half Marathon in France, Colombo Marathon in Sri Lanka and most recently the NBC Dodoma Marathon in Tanzania.