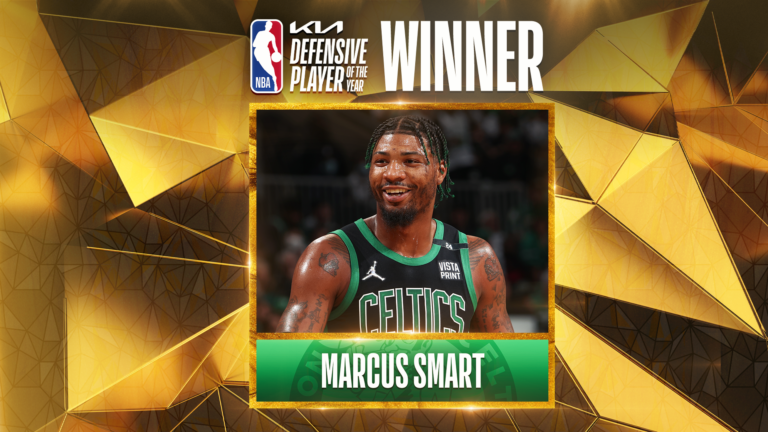 Boston Celtics guard Marcus Smart has been named the 2021-22 Kia NBA Defensive Player of the Year, the NBA announced today.

This marks the first NBA Defensive Player of the Year Award for Smart, who becomes the first guard to earn the honour since Gary Payton in the 1995-96 season. Smart is also the second player to win the award with the Celtics, joining Kevin Garnett (2007-08).

Smart receives the 2021/22 KIA defensive player of the year award from the last guard to win it way back in 1995/96, Gary Payton

“To be able to be named the Defensive Player of the Year and be the first guard since Gary Payton in 1996 to win this, it just shows not only me and everybody else that it can be done,” Smart said after winning the honors.

“The way the game is changing, the guards are being more recognized for their abilities to do certain things that we shouldn’t be able to do at our size. I think this award and me winning it shows that and the path for us guards now and in the future.”

A starter in all 71 of his games played in the 2021-22 regular season, the 6-foot-4 Smart ranked seventh in the NBA in steals per game (1.68) and tied for sixth in total steals (119).  He had 19 games with three or more steals, including two games with a season-high five steals.

Smart, 28, ranked among the league leaders in several “hustle” categories, finishing tied for fourth in the NBA in loose balls recovered (75) and tied for 10th in both deflections (206) and charges drawn (16).  He also set a career high in defensive rebounds per game (3.2).

Behind Smart, the Celtics led the NBA in defensive rating (106.2) and points allowed per game (104.5) and held opponents to the lowest field goal percentage (43.4) and three-point field goal percentage (33.9).  The strong defense helped propel the Celtics to a 51-31 record and the second seed in the Eastern Conference for the 2022 NBA Playoffs presented by Google Pixel.

“I’m a defender, and that’s what I do,” Smart said. “I defend and try to come and be one of the best ones to do it. With this award, all that does is just continues to help me and show me that there’s still more to go and to continue the path that I’m on.”

The voting results for the 2021-22 Kia NBA Defensive Player of the Year Award are below.  The balloting was tabulated by the independent accounting firm Ernst & Young LLP.  Complete ballots for each voter will be posted at PR.NBA.com after the announcement of all end-of-season awards.

A year-by-year list of the Kia Defensive Player of the Year Award winners: