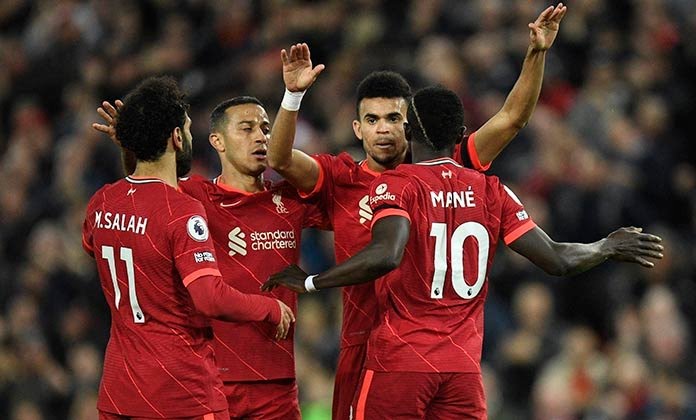 Liverpool embarrassed Manchester United for the second time this season to move top of the Premier League as Mohamed Salah struck twice in a 4-0 thrashing on Tuesday.

Jurgen Klopp’s men won 5-0 at Old Trafford in October and expectations of a similar rout were well-founded as Liverpool exposed the massive gulf between the sides with Luis Diaz and Sadio Mane also on target.

Liverpool move two points ahead of Manchester City at the top of the table, but still need the English champions to slip up in their remaining seven league games of the season to win the title.

In contrast to the fine margins separating Liverpool and City, a 22-point gap now lies between the league leaders and United in sixth with only Tottenham and Arsenal’s own failings keeping the Red Devils in the race to qualify for next season’s Champions League.

United interim manager Ralf Rangnick forewarned what would happen to his side if they defended as they did in a 3-2 home win over bottom-of-the-table Norwich on Saturday.

The German’s attempt to plug the holes in the United defence was a recall for Phil Jones, making just his second Premier League appearance since January 2020, as part of a back five.

But it took just five minutes for the visitors to be cut open.

Mane’s through ball picked out Salah in acres of space and he found Diaz to apply a simple finish from close range.

Two minutes later the fierce rivalry between English football’s two most successful clubs was set aside in a show of support for Cristiano Ronaldo.

The Portuguese superstar was missing for United after revealing on Monday that his newborn baby son had died.

Supporters on all sides of Anfield stood for a minute’s applause, while the Liverpool fans sang their own anthem “You’ll never walk alone”.

On the field, the one-way traffic continued with United barely able to get out of their own half.

A second Liverpool goal seemed inevitable and when it arrived, it was of the highest quality.

Joel Matip fizzed the ball into Mane’s feet and the Senegalese lofted a first time pass over the top for Salah.

The Egyptian had not scored for Liverpool from open play since February, but showed no signs of a lack of confidence as he cushioned the ball into his path and slotted low past David de Gea.

Diaz rounded off another brilliant team move before half-time only to be flagged offside.

Half-time offered United some respite and they improved markedly after the break thanks to the introduction of Jadon Sancho.

The England winger created the visitors’ one big chance to get back into the game as Alisson Becker spread himself to block from Marcus Rashford and Anthony Elanga.

Liverpool are now potentially 10 games away from a first ever quadruple of Premier League, Champions League, FA Cup and League Cup titles.

And they look set to pounce on any wobble from City in the run-in with their lethal collection of forwards all in top form.

Mane coolly steered home the third from Diaz’s cross to end any hope of a United revival.

Salah then took his tally for the season to 30, five of which have come in two games against United, as he lifted the ball over De Gea from Diogo Jota’s pass five minutes from time.