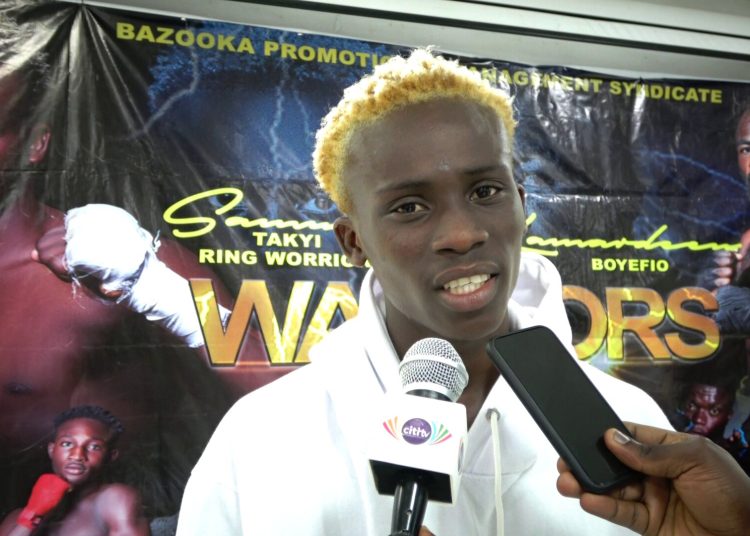 Olympic bronze medalist, Samuel Takyi, has vowed to dominate the local, continental and global lightweight division in three years time after a successful professional debut which saw him recording a second round knockout against Kamarudeen Boyefio at the Bukom Boxing Arena last Friday.

Despite fighting a journeyman, who barely threatened him during their super featherweight contest, Takyi was impressive and won the heart of boxing fans.

He was merciless as he dropped Boyefio (11-11, 8 KOs) three times in the opening round and went on to knock down his hapless opponent twice with a flurry of punches in the second round before referee Erasmus Owoo stopped the fight.

“This is the beginning of greater things to come my way as a pro,” Takyi told BoxingAfrica.com after the bout.

“I am ready to face anybody at lightweight. I feel good and I believe I can make an impact at the world stage within the next three years,” he assured.

It was a left jab to the chin that first dropped Boyefio in the first round. Takyi continued with a flurry of punches to the head and face of Boyefio and dropped him again with a big right hand to the head.

Takyi pounced on the experienced fighter and sent him to the canvas again with another right hand, but Boyefio managed to beat the count, thanks to the bell.

Boyefio continued to receive punishment in the second round with some combinations from Takyi. Takyi continued toying with his opponent after landing punches without any response from Boyefio.

Referee Owoo was forced to stop the fight after seeing Boyefio visit the canvas twice in the second round without fighting back.

On the undercard, Derrick Quaye (3-0-1, 2 KOs) earned an unanimous decision win over his nemesis, Daniel Quaye (0-1-1, in their six-round super lightweight rematch.

Issah Inusah (3-0, 3KOs) came back from three knockdowns to secure a seventh round TKO victory over Abubakar Mustapha (0-2) in a light heavyweight contest.

Emmanuel Arday Aryee retired Francis Aryee in the fourth round of their super lightweight bout.