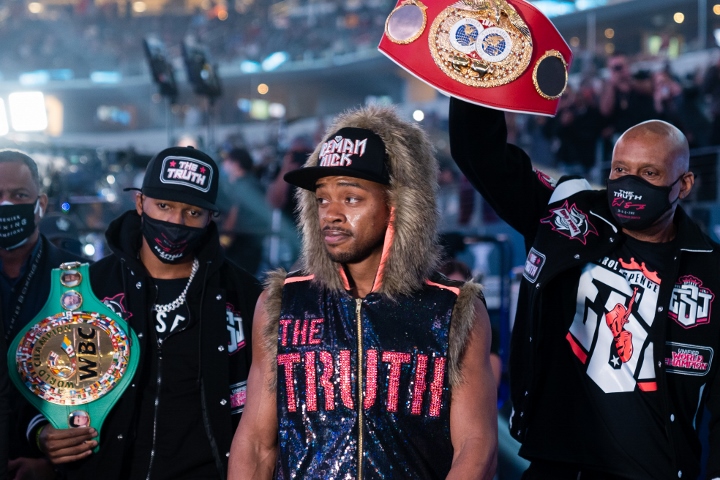 Terence Crawford responded to Errol Spence Jr’s Instagram post today, saying that he’s going to “smash” him when the two fight for the undisputed welterweight championship next.

IBF/WBA/WBC 147-lb champion posted a photo of himself this week at a supermarket with a shopping list with checkmarks next to the names of Kell Brook, Yordenis Ugas, and Shawn Porter, as if he’d already put them in his basket. The only name left on Spence’s list is Crawford.

The Spence vs. Crawford fight still needs to be negotiated, and given the history between the two, you can’t assume the match will get made. Chris Williams is going to remain skeptical until he sees them inside the ring.

“I love this energy. Keep it up. I’m going to smash you, and then I’m coming for your cheerleader Twin Charlo [Jermell]. That’s if he wants to fight,” said Terence Crawford in responding to Errol Spence’s Instagram post.

“I have for a while leaned Spence, and I have no reason to change that opinion,” said Carson Merk to Porter Way Podcast. “At the highest level, the fractions are so small. The difference are so small. So this is one where we can’t say, ‘He takes care of him easily.’

“I think Errol is better, but Bud’s not far behind. They’re still the best fighters on the planet.

“There’s a little spice between these two [Spence & Crawford]. You heard Errol after the fight, and Bud, ‘Keep the belts warm until I pick them up.’ It’ll be fun, and you’ve got Derrick James. He doesn’t back down for a verbal exchange. You know BoMac is down for it.

“These are the two best welterweights we’ve had in decades. I hope we see it, there’s no reason why it can’t happen. I’m not even going to put that in the atmosphere that it doesn’t happen.

“Terence is, ‘You want some more, come get it,” said Shawn Porter when told that Spence will keep pressuring nonstop. “This will be the next fight for both of these gentlemen. The only thing is, that Crawford has to feel respected.

“If he feels underappreciated, we always talk about A-side, B-side, I think in this case, whoever is conducting the business, don’t talk A-side, B-side.

“This is a 50-50 fight and flip for it. Then in the rematch, you talk 60-40 because of what has gone down,” said Porter of the Spence vs. Crawford unification.

“I’m not trying to lose the fight, but I’m trying to tell you how to do the business with Crawford. You make Crawford feel respected,” said Porter in making it clear he feels Spence should agree to the 50-50 split idea.

“He should be respected,” said Merk about Crawford.