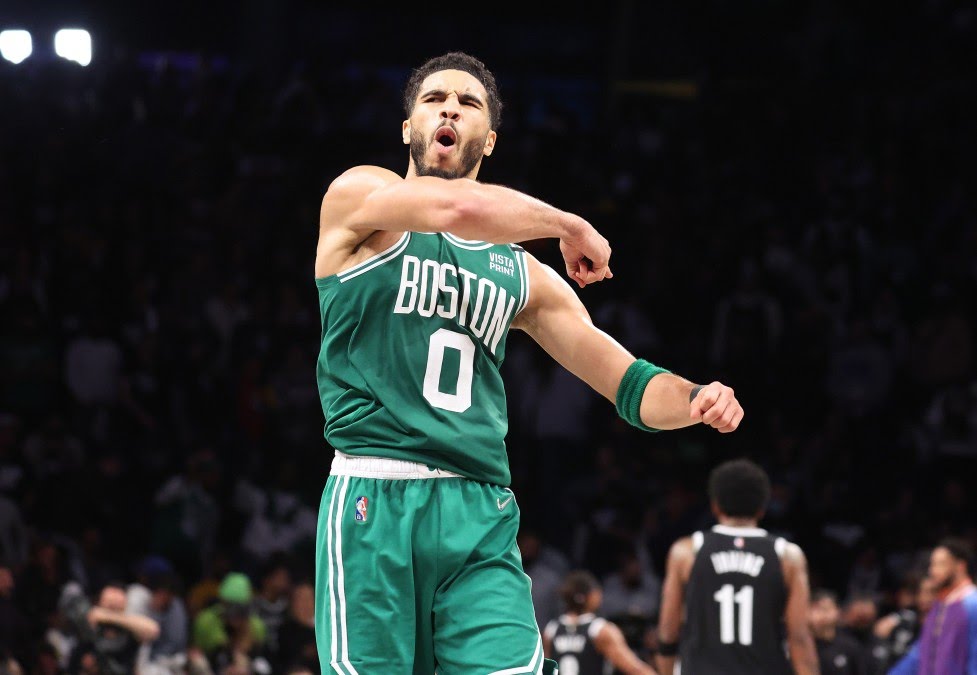 The stoppers are suffocating the scorers.

And as Boston was finishing another shutdown effort against Kevin Durant and the Nets, a loud “Let’s Go Celtics! Let’s Go Celtics!” chant broke out from the many fans in green who had seats in Barclays Center.

There wasn’t much for the home fans to cheer about as the Nets face a team that just won’t let them get anything going.

Jayson Tatum scored 39 points, Jaylen Brown had 23 and Boston took a 3-0 lead over Brooklyn with a 109-103 victory Saturday night.

Again making things difficult on Durant and Kyrie Irving, the Celtics put themselves in position to sweep their way into the second round with a victory Monday night in Brooklyn.

The Celtics forced 21 turnovers that led to 37 points. Tatum had six of their 13 steals.

“My message is, nobody plays harder than we do,” Tatum said.

Durant took only 11 shots, finishing with 16 points, eight rebounds and eight assists. Irving was 6 for 17, missing all seven 3-pointers, and also had 16 points for the Nets, who have to decide if they will give Ben Simmons his debut Monday in an elimination game.

Boston’s defense against the Nets’ firepower was supposed to make this a can’t-miss series, even though it matches a No. 2 seed against a No. 7.

But it’s been mostly all Celtics since Tatum’s basket at the buzzer gave them a victory in Game 1. Durant and Irving combined for just one basket in the second half of Game 2, never had much impact in this one and might get only one more chance.

“We know what it is,” Durant said. “I don’t think no speech or anything will do at this part of the year. You know what it is. We’re down 3-0. We got another game on Monday. Just come out and play.”

Boston led most of the way before the Nets cut it to three with just over a minute remaining in the third quarter. But Marcus Smart scored on a follow shot, made a jumper in transition before Brown got a steal and dunk to make it 81-72 going to the fourth.

Brown kept the Nets at bay from there, repeatedly finding a 1-on-1 matchup and driving to the basket. He set up Tatum for a 3-pointer in the corner after the Nets had gotten back within four, then made a jumper before Tatum converted a three-point play that made it 96-84 with 6:25 to play.

The Celtics got center Robert Williams back after missing nearly a month with torn cartilage in his left knee, making their defense even stronger.

Bruce Brown was the Nets player who could really solve it, scoring a career playoff-high 26 points.

“We’re not being forceful in our actions. We’re second-guessing ourselves a little bit. Throwing a lot of passes that are second thoughts. They’re too good a team for us to do that,” Nets coach Steve Nash said.

He made a 3-ponter on his first shot attempt after going 0-for-10 in the second half in Game 2, but he could never consistently find room to shoot while committing five more turnovers and looking far off the player who came in third all-time in the playoffs with 29.4 points per game.

“He’s had a a hard time getting it going,” Jaylen Brown said. “We want to keep it that way because we know what he can do.”

The Celtics limited Durant to just two shots and led 30-25 after one quarter, then got seven straight points by reserve guard Payton Pritchard to open the second and push the lead to 37-25. Boston was still ahead by eight with under 1½ minutes left in the half, but the Nets scored seven straight and it was 53-50 at the break.

TIP-INS: Nets — Patty Mills was honored before the start for being voted the winner of the NBA’s Sportsmanship Award on Friday. … Blake Griffin played for the first time in the series, scoring eight points. … Director Spike Lee, a longtime Knicks fan, was at the game wearing a Brooklyn Dodgers jersey and hat.

Celtics — Smart scored 14 points. … Williams had two points and two rebounds in 16 minutes off the bench in his first game since March 27 after missing final seven games of the regular season.

SIMMONS STATUS: Nash said Simmons scrimmaged 3-on-3 Saturday morning and had no setbacks. He said it’s possible Simmons plays in Game 4 but cautioned that given his long layoff, with his herniated disk at the end of it, that there was more to consider than if Simmons felt good after his workouts.

“There’s a lot of bigger picture, bigger context to how he’s feeling, how able he would be to adapt to the environment,” Nash said. “It’s a little different than playing a game that’s stashed away in the middle of the regular season, so I think that there’s a few factors at play here to evaluate when he’s ready to play.”