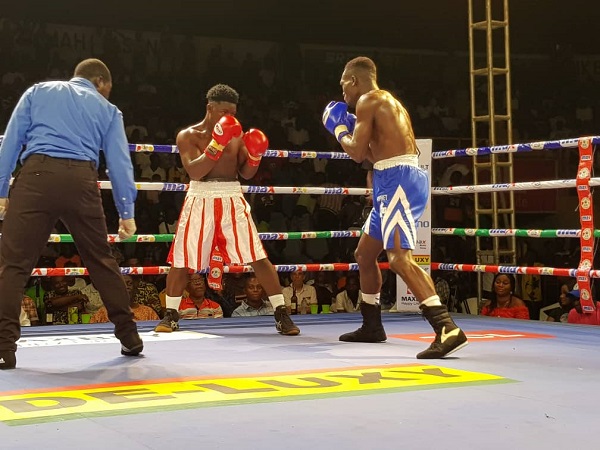 Sonia Gym took charge atop affairs after fight night 5 of the Deluxy Professional Boxing League which came off at the Bukom Boxing Arena in Accra last Saturday night as Samuel Lamptey defeated Frank Oppong of The Gym in their super featherweight clash to maintain Sonia’s unbeaten run in the competition.

The judges scored the fight 60-54, 59-55 and 59-55 to hand Lamptey unanimous points victory in their six-round encounter.

Sonia now leads the log of 12-club competition with 15 points from five wins in as many fights. They lead Fit Square Gym which is in second position on 13 points with four wins and a draw in five fights.

The fight night attracted another large attendance with every exciting bouts, with Loren saving the best for last as he battered his stubborn opponent over six rounds. He went home as the best boxer of the night and won a 32-inch TCL LED TV.

In other bouts, Michael Abban of Black Panthers Gym recorded a fourth round TKO victory against Ishmael Tackie of Seconds Out Gym while Michael Offei Dodoo of Attoh Quarshie Gym recorded a first round TKO win over Kweku Ajato of Sea View Gym in a lightweight encounter as Adjato’s corner threw in the towel much to the annoyance of the boxer who felt he could fight on despite his rather clumsy performance in 2.17 minutes of action.

As has become a key feature of the competition, some of the most exciting fights involved juveniles, including a female contest between Najat Lokko and Magritte Oyo Owoo.

After five Fight Nights, Wisdom Gym occupy the bottom spot of the league table without a points just as 11th-placed The Gym which has no point after losing all five fights.