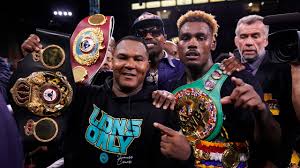 Jermell Charlo’s patience was waning. He had to wait a few additional months to get his rematch with Brian Castaño, and on Saturday night, he had to wait a little longer when Castaño arrived late to the Dignity Health Sports Park in Carson, California.

The Houston-based IBF/WBA/WBC World Super Welterweight Champion added the WBO belt Castaño once held with a masterful stoppage victory at 2:33 of the 10th round in a Premier Boxing Champions event on SHOWTIME.

“This is unbelievable! I did it for us USA! I did it for us. Shoutout to Carson, California, L.A. and the whole surrounding area,” Charlo exclaimed. “Thanks for coming out tonight. Lions Only. We put on a show. I gave you a hard-fought 10 rounds. I gave it my all and that was my end result.

“I could consider this fight being a little bit nerve-racking. I felt like this was my first fight. You get nervous and you get the ants in your pants. I knew Castano was going to give it his all. I knew I had trained very, very hard but you all can see that I came in at 152 pounds because I was really in shape and I wanted to make sure that this was my fight. I’m just super excited me and my brother did for Lions Only. The future is bright.”

The first Charlo-Castaño fight ended in a split-decision draw on July 17. 2021. The original rematch was slated for March 19 at the Crypto.com Arena in Los Angeles, but that was postponed when Castaño injured his right biceps during training in February, pushing the fight back almost two months. It’s an injury Charlo doubted.

Then, Castaño arrived late to the venue Saturday night, forcing the fight to start late.

And finally, the opening bell rang.

Charlo found a rhythm early. With 2:03 left in the first, Charlo popped Castaño (17-1-2, 12 KOs) with a jab to the face, and doubled with two left hooks to the body. With :55 left, Castaño snuck in a left hook that caught Charlo on the jaw and him backed up.

Charlo closed the first by nailing Castaño with a left to the face.

With 1:23 remaining the second, a Charlo right caught Castaño, followed by a left. Charlo used great movement, and through the first two rounds was not pressed up against the ropes. He countered well with the left hook, and tied up Castaño every time he neared.

Charlo began the third well. He stayed with a consistent jab, a sound weapon. He went to body with a right, and really nailed Castaño with a right with 1:22 left in the round.

Through three, Charlo appeared in command.

With 2:22 in the fourth, Charlo plowed Castaño with a left hook to the body. Castaño kept coming, and tried pressing Charlo against the ropes, as in the first fight, but Charlo used great footwork to get out of harm’s way. Castaño, to his credit, fought his best, to that point, in the closing seconds of the fourth.

Castaño finished the fourth by crushing a right on Charlo’s chin. Charlo defiantly stared at Castaño as the round ended, as if to say, “You can’t hurt me.”

Castaño started coming on more in the fifth. With :40 left in the fifth, the two went banging at each other, neither willing to give in to the other. The defining punch of the round was a Charlo overhand right, which backed Castaño up. Just when Castaño looked like he was trouble, he fought back again.

Charlo seemed slower in the sixth. With :59 left, Castaño hit Charlo with a right and he bore forward with his high guard. Castaño kept pressing Charlo, who finished the round with a right to Castaño’s jaw.

With 1:32 remaining in the seventh, Charlo caught Castaño coming forward with a left hook to the chin that jolted Castaño. Charlo returned to the center of the ring and used his jab again. He used the jab to control the distance, and made Castaño think every time he neared.

“I listened to my corner this time,” Charlo said. “I got in my bag around the seventh round. I started sitting down a little bit more instead of boxing so much and moving around. I saw that he was wearing down a little bit and I was breaking him down. I just saw my punches being more effective. I get stronger in the later rounds if they didn’t know.”

Castaño stalked Charlo in the eighth. Castaño caught Charlo on the face with 2:04 with a lead right. Charlo winged a left hook off Castaño’s head with :31 remaining in the round.

In the first 17 seconds of the ninth, Charlo pelted Castaño with a right, followed by a left hook. Charlo kept cleaving Castaño’s high guard with the jab. Castaño was coming forward. But he wasn’t punching. Charlo was up on his toes in the last minute of the ninth, and Castaño had a hard time keeping up with Charlo’s movement.

With 2:03 left in the 10th, a Charlo left hook followed by the right got through. Charlo looked strong. Then finally, with :52 left in the 10th, Charlo cracked Castaño with a compact left hook to the jaw. Castaño’s delayed reaction saw him crumble to the canvas for the first knockdown.

“I threw a body shot and I threw a left hook and that’s all she wrote,” Charlo said. “Once I saw him crumble in front of me, I was pretty sure he was going to get back up, because that was the first knockdown. But I knew it was over.”

Referee Jerry Cantu allowed Castaño to continue with :38 left, though it seemed Castaño was out on his feet. Charlo jumped on the wobbly Castaño and knocked him down a second time with :32 remaining in the 10th with a left to the body and a right uppercut.

Finally, Cantu saw enough and waved it over at 2:33—as Charlo promised, he would stop Castaño.

“The right hand landed perfect and I threw the uppercut,” Charlo said. “This is legacy. This is something that is legendary. I’m a legend. This is a beautiful thing. They’re going to keep putting them in there. When you’re at the top like this, you get a bunch of mandatories. You get a bunch of No. 1 guys so you just have to prepare for it and be ready at all times.”

There was a lot of tension between the two fighters before the fight, but both exhibited class afterwards.

“Everything that was said outside was all bullsh-t,” Castaño said. “Everything that happened in the ring tonight, we showed that we are warriors. That’s the main thing. We have to feed our families.

“We both were fighting back-and-forth. It was power back-and-forth and then his right hand came over and stopped the fight. He’s a champion. He hit me. He got me. But I’m okay.”