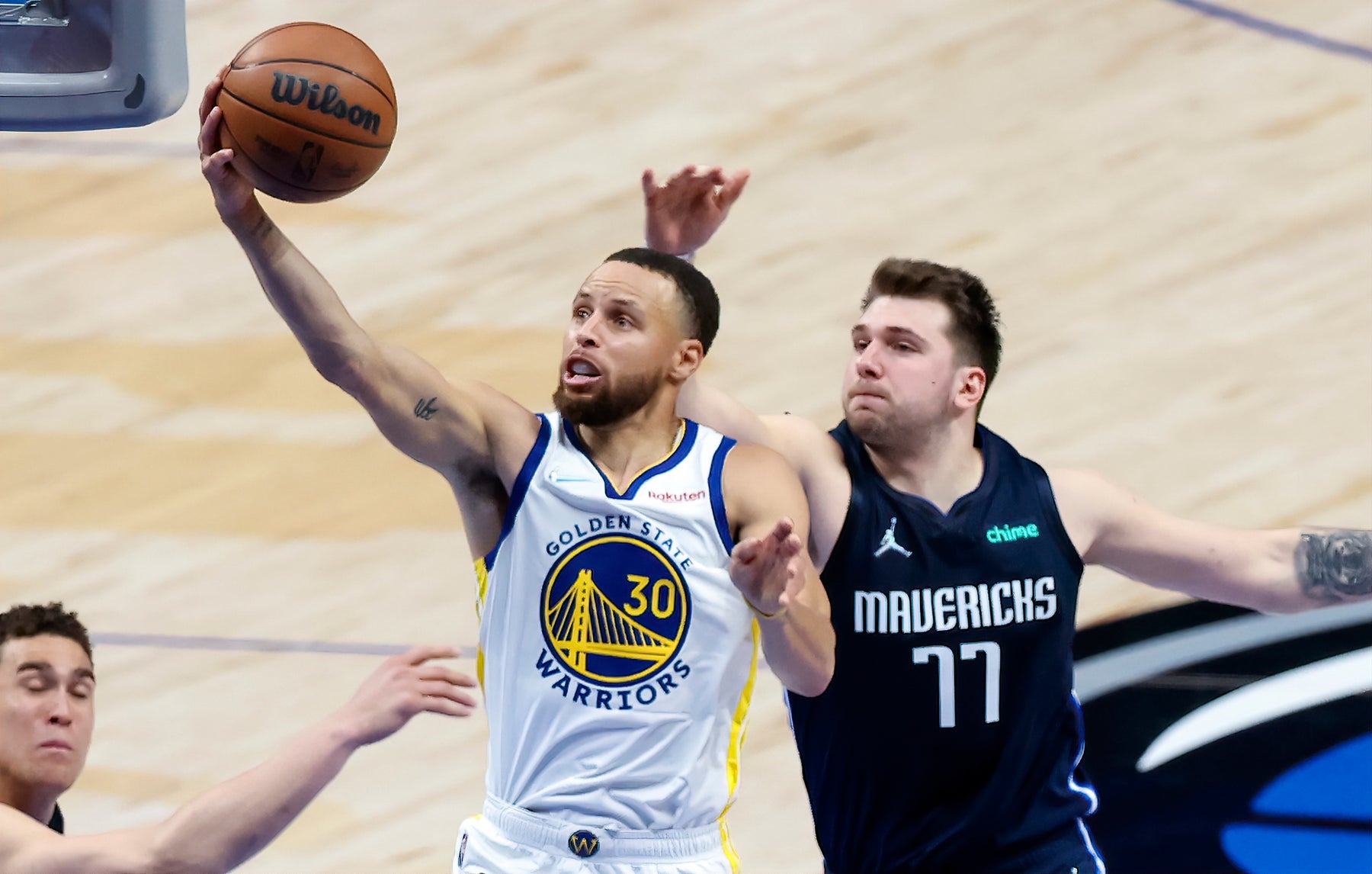 Stephen Curry scored 31 points, Andrew Wiggins added 27 while posterizing Luka Doncic on a dunk and the Golden State Warriors beat the Dallas Mavericks 109-100 Sunday night for a 3-0 lead in the Western Conference finals.

Klay Thompson scored 19 with a pair of big fourth-quarter 3-pointers as the Warriors moved within a victory of a return to the NBA Finals, three years after the end of a run of five consecutive trips that yielded three championships.

Golden State Warriors forward Andrew Wiggins (22) dunks the ball over Dallas Mavericks guard Luka Doncic (77) during the second half of Game 3 of the NBA basketball playoffs Western Conference finals, Sunday, May 22, 2022, in Dallas

Golden State, which swept Portland in its most recent West finals in 2019 before Toronto won the title, goes for the sweep in Game 4 on Tuesday in Dallas. No team has rallied from 3-0 down to win an NBA playoff series.

Doncic scored 40 and beat the first-quarter buzzer with a 32-footer that got the crowd going with the Mavericks again at home trailing 2-0, as they did against top-seeded Phoenix before winning the West semifinal series in seven games.

But that shimmy-inducing bucket was a blip on an otherwise rough night from 3-point range for the Mavericks, who missed their first seven and finished 13 of 45.

Reggie Bullock and Maxi Kleber, two long-range specialists for Dallas, missed all 12 of their 3s combined and were 0-15 overall. Both went scoreless, offsetting Spencer Dinwiddie’s 26 points off the bench. Jalen Brunson scored 20.

Wiggins’ dunk over Doncic was originally ruled an offensive foul midway through the fourth quarter. The Warriors challenged, and the ruling was Wiggins’ elbow to Doncic was incidental contact, giving Golden State a 93-83 lead.

Dallas Mavericks guard Luka Doncic (77) reacts to a call during the second half against the Golden State Warriors in Game 3 of the NBA basketball playoffs Western Conference finals, Sunday, May 22, 2022, in Dallas. (AP Photo/Tony Gutierrez)

About a minute later, Wiggins, who had 11 rebounds, moved quickly down the right baseline for a follow dunk on a miss by Curry as the Warriors extended their NBA record with a 26th consecutive series in which they won at least one road game.

One of Dinwiddie’s 3-pointers got Dallas within five points with 1:15 remaining, but Jordan Poole answered with one from the left wing just inside the final minute.

The most tense moment of the series came late in the first half after a corner 3 from Curry capped an 8-0 run that put the Warriors in front by a point and helped them to a 48-47 halftime lead. And it left Curry confused.

Stephen Curry #30 of the Golden State Warriors reacts after a no call foul against Luka Doncic #77 of the Dallas Mavericks during the fourth quarter in Game Three of the 2022 NBA Playoffs Western Conference Finals at American Airlines Center on May 22, 2022 in Dallas, Texas. (Tom Pennington/Getty Images)

Curry ran the length of the court with his tongue hanging out after Dallas called timeout. As he circled back toward his bench, Curry walked by Doncic with teammate Juan Toscano-Anderson nearby.

Doncic appeared to take issue with something Toscano-Anderson said and started toward the Golden State bench before officials along with coaches and players from both teams intervened. Meantime, Draymond Green and injured Dallas guard Tim Hardaway Jr. exchanged unpleasantries about 45 feet apart.

After the timeout, Curry could been seen saying, “What happened?” and approached Doncic to talk about it. The exchange ended with Green as the peacemaker with Doncic.

Warriors: Green got a technical foul, his second of the series, after an extended conversation with official Marc Davis when he was called for a backcourt violation when he hurriedly tried to step back over the midcourt line to catch a long, unexpected pass from Curry. The crowd was howling for a technical and finally got it. Seconds later, Green was called for his first foul and didn’t like the call. But he directed his complaint at his own bench instead of the officiating crew. … Otto Porter Jr., who averaged 10.5 points on 82% shooting the first two games, limped to the locker room in the first half and was ruled out with left foot soreness.

Mavericks: Bullock won the Kareem Abdul-Jabbar social justice award. He has been active in the LGBTQ+ community. His sister, a transgender woman, was killed in 2014. Bullock worked with several organizations in the Dallas area after signing as a free agent in the offseason and has long been active in similar pursuits in his native North Carolina. … Dorian Finney-Smith got a technical early in the second half for an elbow to the back of Green after a made Dallas free throw.