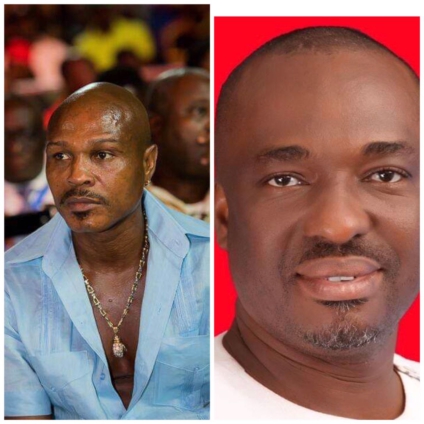 Boxing Legend Ike ‘Bazooka’ Quartey is threatening to sue Ghana Boxing Authority over their refusal to grant his boxer Samuel Takyi a release letter for his second professional bout which is only nine days away in South Africa. What is the reason? As the boxer’s promoter, Ike Quartey disagrees with a proposed 2% development levy being demanded by the Ghana Boxing Authority (GBA) from Takyi’s next purse.

In an exclusive conversation with Joy Sports, the former WBA welterweight champion said it was wrong for the GBA to demand that percentage. “The Ghana Boxing Authority claims they will use it for the development of the sport but it’s not their duty. The Ghana Boxing Federation which manages amateur boxing does development,” Ike told Joy Sports.

A not-so-pleased Quartey who is the founder of Bazooka Promotions also accuses the GBA’s President Abraham Kotei Neequaye of stifling the boxer’s economic rights. “I will sue the GBA if they fail to give Takyi his release to fight in South Africa. They want to deny his right to make income and take care of himself,” he told Joy Sports.

The Ghana Boxing Authority’s Rules and Regulations Manual specifically the guidelines for foreign travels and issue of release letters and requests for visas Clause 17, states “No boxer ordinarily resident in Ghana or licensed by the Ghana Boxing Authority shall be allowed to travel outside the country to engage in any professional boxing unless he has obtained a release letter from the Authority.”

Based on this rule, the Abraham Kotei Neeqauye-led GBA has started a drive to ensure all boxers who fight outside Ghana comply and pay. Former IBF lightweight champion, Richard Commey is currently serving an indefinite ban from the GBA for his refusal to pay the levy from his fight with Vasily Lomachenko and some disciplinary issues. Commey’s argument against the levy was simple – that he ceased to be a licensee of the Ghana Boxing Authority since 2017 which meant he had not paid any fees to put him in good standing to, in turn, make him a signee to the GBAs rules and regulations.

Ike ‘Bazooka’ Quartey himself had a similar case with the GBA back in the year 2000. He also refused to pay a percentage of his purse from the bout against Fernando Vargas. As a result, he was ordered by the GBA not to use the Ghana flag.

In his response, the GBA’s President Abraham Kotei Neequaye stated clearly that his outfit would hardly back down on its stance as it is captured in the Authority’s rules and regulations. According to him some of the nation’s marquees who regularly fight in the US and other big boxing markets have undertaken to pay the levy.

“Isaac Dogboe was here with his lawyers and signed an undertaking to pay. Emmanuel Tagoe has also agreed in principle to pay,” he added.

“The GBA secretariat runs on resources and personnel and we have always facilitated for boxers who want to pursue their opportunities elsewhere. We run an office. We use paper to print these letters we give to the boxers. If the boxer wants to flout our rules he can go ahead but the GBA will not sign a release letter for Samuel Takyi,” he said.

What do Takyi & Bazooka Promotions lose?

The boxer currently has a managerial contract with Quartey’s son, Mustapha while the legend is his promoter. He has planned to collaborate with a foreign promotional company to help the boxer land some very lucrative and credible bouts before venturing into the world title space.

Takyi was expected to sign a long term contract with Golden Gloves Promotions based in Johannesburg, South Africa where he was to fight Madlenkosi Sibuso at the Emperors Palace Hotel in a four-round junior lightweight contest on June 10.

As things stand now, he may lose the opportunity to fight and this may also affect the intended signing of a long term co-promotional contract with the Golden Gloves.

As a licensee of the GBA, Takyi is still eligible to fight here in Ghana. And until this matter is solved Takyi will not be able to honour any bout outside Ghana.