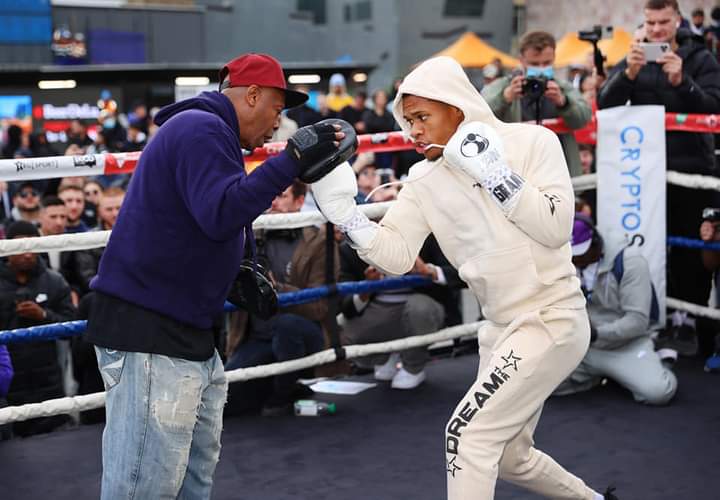 Despite the plethora of Australian and Greek flags — Kambosos is of Greek descent — the local fans showed respect for the 23-year-old American star, who has been in Melbourne for the better part of two weeks.

Kambosos entered the ring to raucous cheers, the Australian and Greek flags draped over his shoulders.

“Born ready,” Kambosos said, as he proceeded to shadow box and soak in the long-awaited homecoming. Kambosos, who hails from Sydney, has not boxed at home since 2017.

Since then, he has won fights in America, Malaysia, England and Greece, a Cinderella run that culminated in last November’s stunning upset over Teofimo Lopez.

MELBOURNE, AUSTRALIA – JUNE 02: during a public training session ahead of the World Lightweight Undisputed Championship, at Federation Square on June 02, 2022 in Melbourne, Australia. (Photo by Mikey Williams/Top Rank Inc via Getty Images)

Kambosos-Haney, the 10-round Jason Moloney-Aston Palicte bantamweight battle, and a 10-round heavyweight showdown between Junior Fa and Lucas Browne will be broadcast Saturday LIVE on ESPN, ESPN Deportes and ESPN+ at 9 p.m. ET/6 p.m. PT.