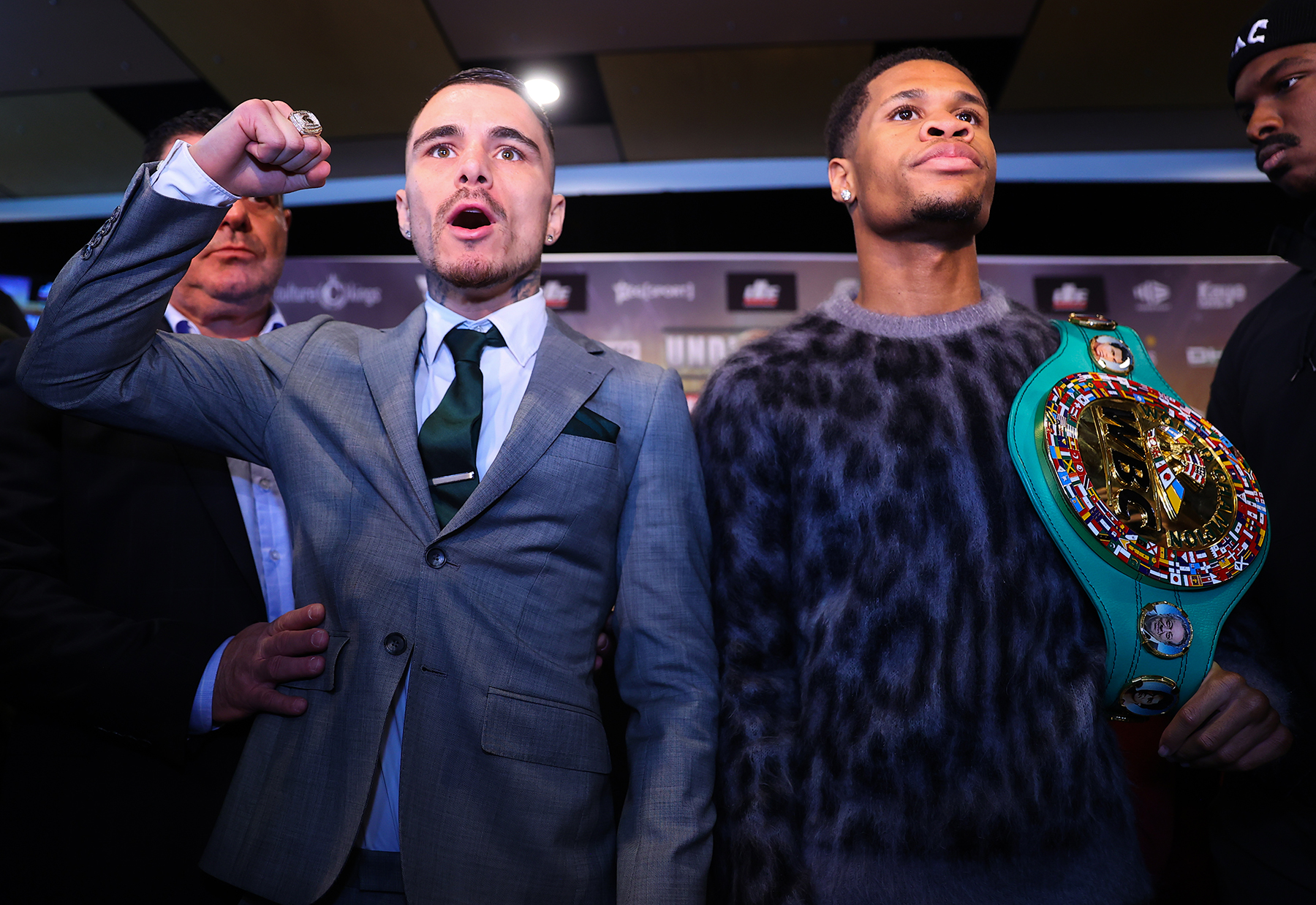 Most of the trash talk is over. It is nearly time. WBO/IBF/WBA lightweight champion George Kambosos Jr. (20-0, 10 KOs) and WBC champion Devin Haney (27-0, 15 KOs) are two days away from their showdown for the undisputed title at Marvel Stadium. The fight, Sunday local time and airing Saturday evening in the United States, is one of the biggest bouts ever on Australian soil.

More than 40,000 fans are expected, as the 23-year-old Haney attempts to make history more than 8,000 miles from home. Kambosos, from Sydney, Australia, is back home and attempting to score his second straight upset following last November’s title-winning thriller over Teofimo Lopez.

In the 10-round co-feature, Australian two-time bantamweight title challenger Jason “Mayhem” Moloney will battle Filipino standout Aston Palicte. The ESPN-televised opener will be a 10-round battle of big men between New Zealand-born heavyweight Junior Fa and Australian Lucas Browne. Kambosos-Haney, Moloney-Palicte and Fa-Browne will be broadcast live on ESPN, ESPN Deportes and ESPN+ at 9 p.m. ET/6 p.m. PT.

“It has been a long, hard journey. Everyone knows that, but I’m ready for Sunday. All the tough moments have gotten me ready for Sunday, and I will shock the world again. Underdog? Beautiful. We are ready.”

“I’ve been through it all, so whatever comes to the table on Sunday, we’ll be ready. We’ll be fully prepared. We are warriors. Whatever way we have to go, we are prepared.”

On the mental warfare against Haney

“I’m just having fun. I’m enjoying the moment. I’m just talking the truth. If it has or hasn’t affected him, so be it. We’ll step in there on Sunday, and that’s where it matters.”

“This is the biggest stage, but this is something that I have dreamed of. I knew that one day I would be here, but I didn’t think that it would come this early, but I’m thankful. It’s time.”

“I knew that he would try anything that he can to try to throw me off my game or get me unfocused. But he can say what he wants to say, because regardless I’m going to do what I do when we step into the ring. I will come out victorious by any means.”

“A win would be very satisfying because that means I did it against all odds, even when things weren’t working in my favor. They were trying to do anything they can to put me at a disadvantage. But when I come out on top, it’s going to be that much sweeter. I look forward to bringing the belts back and showing my dad what we accomplished together.”

“I feel like I’m the far better fighter. I have far more skills than him. I will show him on Sunday. It’s for me to show in the ring. The betting odds really don’t matter because I will show you no matter what they say. I’m levels above him.”

“This should be a terrific match. These two young men are at the top of their game. They each have a lot of pride. George Kambosos beat Teofimo Lopez, a fight he was not expected to win based on the so-called experts, but he won that fight and won all of these belts. Devin Haney is one of our bright young fighters in the United States who has attracted a lot of attention and always gives a great performance. Both guys are undefeated. This is what boxing is all about, and it should be a terrific match.”

“George Kambosos holds most of the titles. He’s earned this. He beat Teofimo Lopez. He’s taken every challenge put in front of him. At times, he’s fought in front of nobody. He’s traveled the world and has fought on other people’s territory time after time in order to get the opportunity to be the undisputed champion. And now he’ll have the opportunity to gather every belt if he can beat Devin Haney.”

“Devin Haney is a warrior and a guy who wants those belts. He is willing to take a challenge and willing to get on an airplane and go halfway around the world, even without this dad, because he understands the importance of this moment and what this opportunity means.”

MELBOURNE, AUSTRALIA – JUNE 03: Jason Moloney speaks during the press conference ahead of his bantamweight fight with Aston Palicte, at Richmond Rowing Club on June 03, 2022 in Melbourne, Australia. (Photo by Mikey Williams/Top Rank Inc via Getty Images)

“This is a massive opportunity for me. A win over him will get me another opportunity to fight for a world title. I’m just so excited, and I’m so grateful to be a part of this show. Being a part of his event has been tremendous, and it just gives me more hunger. It gives me more determination to collect those belts and to one day headline shows myself at Marvel Stadium. This is a must-win fight for me if I want to achieve my dreams and become Australia’s next world champion. I’ve worked extremely hard, and I’m ready to get the job done.”

“I’m so happy and excited to be a part of Kambosos vs. Haney. Kambosos was my running mate for Manny Pacquiao’s last fight in Las Vegas. Thank you to Team Moloney for choosing me. I’ve trained hard for this fight. Moloney is a good fighter, and I’m a good fighter, too. This is a good fight.”

“Your next fight is always your biggest fight. This is basically where I’m at, and it’s such a huge stage. I’m sitting here and there are belts all over the place. And it’s all really, really cool. But I’m pretty sure that our fight is for a belt, too, and I noticed Lucas didn’t bring his belt. Hopefully, he doesn’t forget it on Sunday because I’ve made room for it in my baggage for the way back home.”

“I’m 43 years old. I’ve got three or four more fights to go. I want to solidify my career, and I want to take good fights. I don’t want to take a fight where I’m just there to roll someone over. Junior Fa and Joseph Parker have been on the radar for many years. Obviously, it’s a good little rivalry between Australia and New Zealand. So, for me, it makes sense that I fight Junior now.”