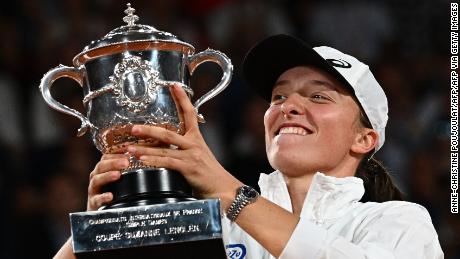 Iga Swiatek has been nearly unstoppable this year — and now she has a second grand slam title to prove it.

The Polish star won the French Open for the second time on Saturday as she defeated Coco Gauff 6-1 6-3 in Paris, extending her unbeaten run to 35 matches.

That equals Venus Williams’ 21st century record for consecutive wins set back in 2000 and cements Swiatek’s status as the best player in women’s tennis at the moment.

“Two years ago, winning this title was something amazing, I wouldn’t expect it ever,” the 21-year-old said during her on-court interview after the match.

“But this time I feel like I worked hard and did everything to get here even though it was pretty tough and the pressure was big.”

Swiatek plays a backhand in the French Open final
Swiatek dropped just one set on the way to the final and was largely untroubled by Gauff in the American’s first grand slam singles final.
After breaking Gauff twice at the start of the first set, Swiatek raced into a 4-0 lead before wrapping up the set in just 32 minutes.
The world No. 1 found herself under pressure for the first time in the match at the start of the second set when Gauff converted her first break point and held her serve to take a 2-0 lead.
It was only a glimmer of hope for the 18-year-old, however, as Swiatek quickly shut the door by taking the next five games in a row.
Gauff was able to hold, but so too did Swiatek — taking the set, the match, and another French Open title.
She has now won six consecutive tournaments in a winning run that stretches back to February 16 when she lost to Jelena Ostapenko in Dubai.

“I felt the pressure, I felt baggage on my shoulders, I wasn’t the underdog anymore,” she told NBC about entering the tournament as the top-ranked player on a winning streak.

“I’m even more proud of that — that I could do it and make it for the second time.”

As for Gauff, she struggled for consistency against Swiatek, hitting 23 unforced errors over the course of the match, 14 of which came in the first set.

She was visibly emotional at the conclusion of the match, but in time will be able to reflect on a successful tournament, during which she didn’t drop a set until the final.

And from Monday, Gauff will rise to a career-high position of 13th in the world rankings.

“I know that I’ll get this opportunity again and I hope that I can come on top next time,” she told NBC.

“Today, I really tried my best to win. Obviously, I would change the result but the decisions that I made I thought were the right decisions in the moment and I can’t really change that.”

The focus of the women’s tour now turns to the grass court swing ahead of Wimbledon, which starts on June 27.

Swiatek, who plays her best tennis on clay, has never progressed further than the fourth round of Wimbledon in her two appearances there, but now looks likely to better that record in the coming weeks.