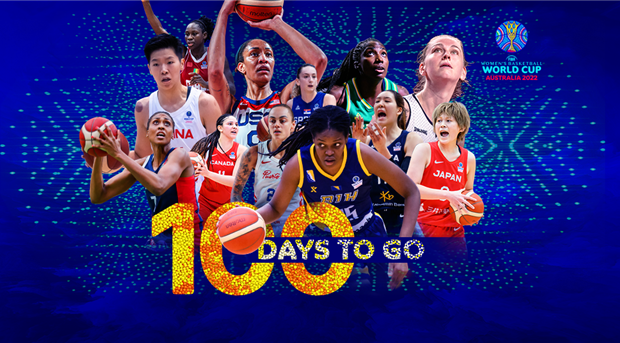 To celebrate 100 days to go until the FIBA Women’s Basketball World Cup 2022 tips off in Sydney, Australian basketball icon and event ambassador Lauren Jackson starred in a flash mob performance in Sydney’s Circular Quay alongside event mascot Karla the kangaroo and over 50 performers.

Intended to create excitement for the international sporting spectacle heading to Australian shores, the basketball-themed performance was choreographed to ‘Fly Away’ by Tones & I, who will perform at the Opening Ceremony of the Women’s Basketball World Cup 2022 on Thursday, September 22.

In line with the milestone, the flash mob finished in a ‘100’ figuration with Sydney’s stunning harbour as the backdrop.

Four-time Olympic medalist Jackson, who was part of the winning team at the 2006 FIBA Women’s World Cup thoroughly enjoyed the morning celebrating the 100 days to go milestone.

“It was incredible to be part of the 100 days to go excitement in Sydney this morning,” Jackson said. “The FIBA Women’s Basketball World Cup was one of my favorite events as a player, so I’ve long been looking forward to seeing the 2022 tournament on home soil.”

NSW Minister for Tourism and Sport Stuart Ayres said the action-packed event would play an essential role in the recovery of the visitor economy.

“With 100 days to go, this event is right around the corner and is a feature of the NSW Government’s 10 World Cups in 10 Years initiative, which supports our ambition for Sydney and NSW to be the events capital of the Asia Pacific.”

The FIBA Women’s Basketball World Cup will be held from Thursday 22 September to Saturday 1 October 2022 at Sydney Olympic Park in Sydney, Australia.

To view the full game schedule click here and tickets are available here.