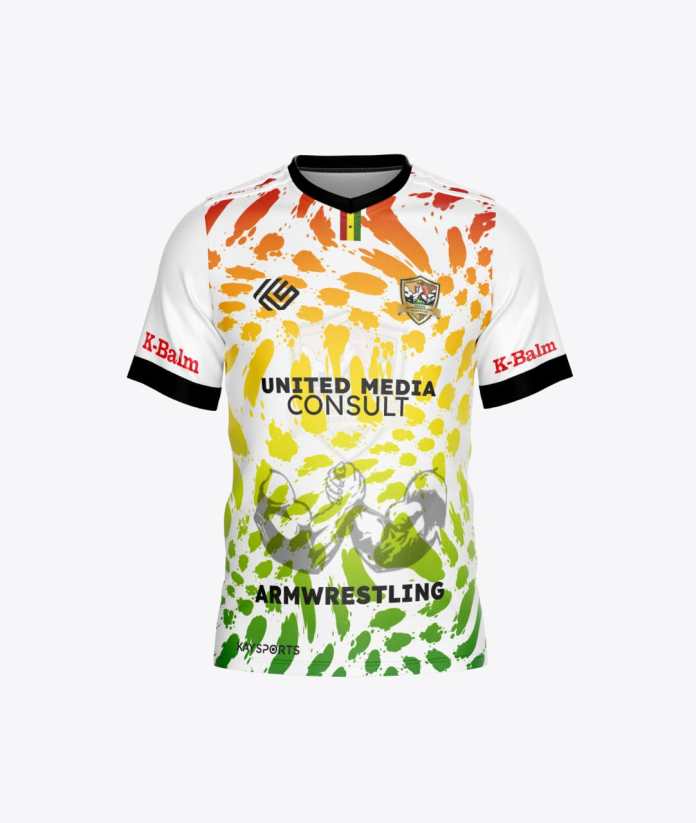 The Ghana Armwrestling Federation (GAF) have partnered Kaysports, a leading sportswear manufacturer in Ghana to unveil the 2022 official competition jersey for the national armwrestling team, the Golden Arms ahead of the 2022 Africa Armwrestling Championship in Lagos, Nigeria.

The new kit sponsored by United Media Consult and K-Balm ointment from Kofikrom Pharmacy which has a little touch of red, yellow, green and a black collar with nearly emborsed watermark of GAF logo is produced by Kaysports, a sports kits and athlete management company in Ghana.

The newly designed apparel would be the competition kit for the Golden Arms during the continental championship in Lagos.

Charles Osei Asibey, the President of the Ghana Armwrestling Federation speaking at the unveiling ceremony thanked Kaysports for presenting the jerseys to the federation ahead of the 2022 tournament  and also highly praised the Minister for Youth and Sports, Hon. Ussif Mustapha, the Chief Director, Alhaji Hafiz, the Natinal Sports Authority boss, Prof. Peter Twumasi and the NSA Board for their efforts towards Team Ghana.

He particularly eulogised Pharm Kofi Addo-Agyekum and Kofikrom Pharmacy for the unflinching and unquantified investment in armwrestling since 2016. He prayed on stakeholders to come to their aid as armwrestling having been added to the sports codes for the Africa Games has become a sport of choice in Ghana.

Mr Kofi Addo-Agyekum, the vice president of the federation and Chief Executive Officer of Kofikrom Pharmacy, also urged the players to give out their best as they wear the jersey to represent Ghana.

“This is not the first time Ghana is going for such a competition of that sort, we have won lots of medals so i know we can bring the trophy home,” he said.

He further tasked them to be disciplined, tolerant and put-up good behaviours as they head to the tournament.

Mr Kwame Ameyaw from Kaysports also urged the national armwrestling team to train well as they seek to raise the flag of Ghana high and urged that Kaysports would have lots of engagement with GAF if team Ghana performs well.

The team, made up of 20 pullers and other officials, will leave the shores of Ghana on Tuesday, July 19, 2022 as they look forward to making yet another history at the championship.

Ghana would be taking part in the 11th edition of the African Armwrestling Championship in Lagos, Nigeria slated July 19 to 24,2022 as they battle other African countries for the grand prize.