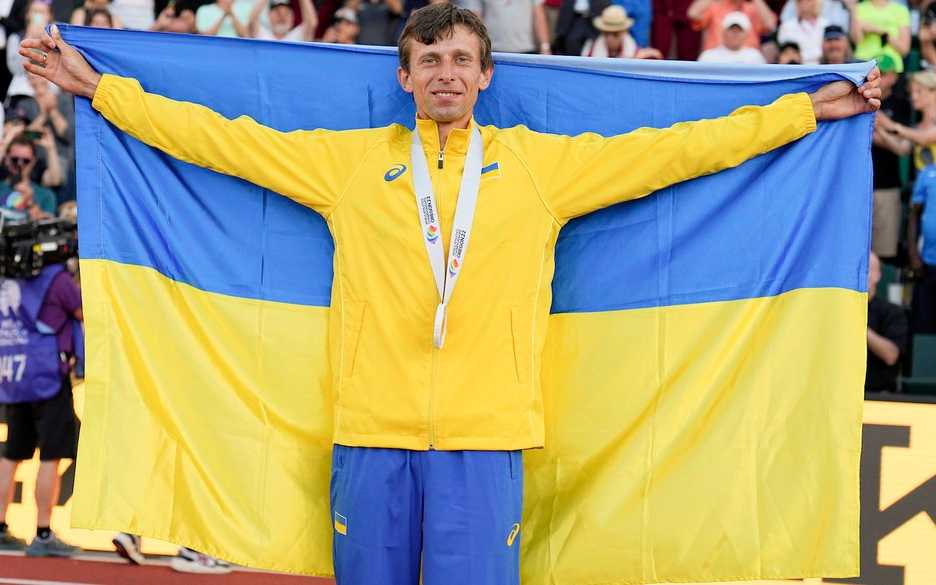 AIPS sat with Ukrainian high jumper Andriy Protsenko for an exclusive interview the day after he claimed the bronze medal in the final of the men’s high jump at the World Championships in Eugene, Oregon.

This more-than-important bronze puts an end to his string of failures at the World Championships. This is his seventh outdoor world championship, but it is the first time he reached the final. On previous occasions he narrowly fell short.

“I thought I would fight for eighth, at least”

“I am satisfied with the result – 2.33m. After the test jumps – I did not expect that I would jump high. I thought that I would be in the top-8 at least. I wanted a medal, of course, but I understood that the boys were very well prepared and I saw how well they jumped in the test jumps. And I jumped badly at that time.

“I could not choose how to run up correctly in the test jumps, because there was a very strong tailwind. Because of this, it was necessary to adjust the run-up. I quietly tried to cope without my coach Hennadiy Zuyev – he is not here with me. I was thinking and only at high altitudes pick up a more or less comfortable run-up”

Andriy tickled the nerves of the fans when he jumped 2.27m only on the third attempt, but the Ukrainian registered the following heights: 2.30m and 2.33m – in the very first jump. This guaranteed him a medal.

Together with the Ukrainian in the strong competition for medals was the Italian high jumper Gianmarco Tamberi who eventually finished fourth. At the indoor world championship this year, the Italian powerfully supported Ukrainian high jumpers Andriy Protsenko and Bohdan Bondarenko.

“I also had the standard for that competition, but I couldn’t come because the war started. So I stayed in the occupied territory and watched the competition in the Kherson region online. Then there was still the Internet. Gianmarco painted his flag on one shoulder, and on the other – Ukrainian, and also wrote our surnames (Protsenko and Bondarenko). Then he won the bronze medal.

“I was grateful to him for such support. It motivated me to train and gave me the desire to prepare for the summer season. Gianmarco is a very jovial guy. He is friends with everyone. When a full-scale war began in our country, he called and tried to help. A Ukrainian family lived at his home in Italy for about 2-3 months.”

“I continued to practice just in case because I did not know what would happen next. Physical training will help me in any case. Even if I go to war.”

After winning the bronze, Andriy Protsenko attracted the most media attention and stayed in the mixed zone for the longest time than other athletes in the evening session. Media from all over the world could not believe how an elite athlete could train just in the middle of a field. Andrii did not get tired of repeating this like a mantra:

TRAINING IN THE VILLAGE

“I was in the village. Finding a field here was not a problem. The main thing was to have equipment. I took a shovel and leveled a 100m track to train on in some way.  There are no tracks anywhere. It was not perfectly even, and besides, it was loose and slippery, because there was sand and clay.

But I had no other options at that time. Instead of barriers, I took arcs, the kind that is used when planting potatoes. Instead of a bar, I put a pipe between wheels. I continued to practice just in case because I did not know what would happen next. Physical training will help me in any case. Even if I go to war.”

After 40 days of occupation, Andriy and his family decided to leave Kherson Oblast.

“Time passed, at first it was calm where we were. There were no soldiers, but then they began to appear, more shots were heard, explosions. And this motivated us to leave. We began to look for possible routes that some of our acquaintances and relatives had already taken. First, we got to Kherson. We stayed there for a week until we found another opportunity to go further. I looked for routes in Telegram, Viber, and Facebook, in all possible social networks. We were also looking for volunteers, carriers who took people here and there, or who simply carried humanitarian aid.”

Andriy Protsenko and his family went to Khmelnytskyi from Kherson and finally felt relief.

“You go out into the street and there is some life. When you do this in Kherson – you go out, for example, at 4 p.m. – there is no one on the streets. The central street in Kherson, on which there were always many cars, many people walking. Now there is no one there, and it’s very unpleasant, not even… it’s very scary. You don’t know what to expect next.”

What is Andrii Protsenko’s next aim?

After the bronze medal at the World Championships, Andriy Protsenko will continue the competitive season. He will compete at the European Championship in Munich. Now he will start looking for a permanent place to live, with conditions for his family and training.

LOOKING FOR A PERMANENT PLACE

“I took my family to visit friends in France. And now I will return and go with them to Poland to look for opportunities there. My coach Gennadiy Zuev is also looking for housing there. I don’t know 100 percent yet, but for now, these are the plans. I will come and we will decide. My season continues. Before the World Championships, the Spanish federation helped us. We were in Alicante for a training session: me with my family and the coach with his family. I am very grateful to them for this because it helped us a lot in preparation for the World Championships. If there was no such support, I doubt whether there would be such results. Now we need to look for something else that will be permanent and, accordingly, that there will be conditions for training”

Twenty minutes of our interview pass and Andrii has to be released to journalists from other countries. They are waiting for an opportunity to talk with a brave Ukrainian who found an opportunity to prepare and win a medal, even when he and his family were in danger.

“I believe in our Armed Forces, I know that our country is the strongest and we will definitely win this fight,” Andriy added at the end.