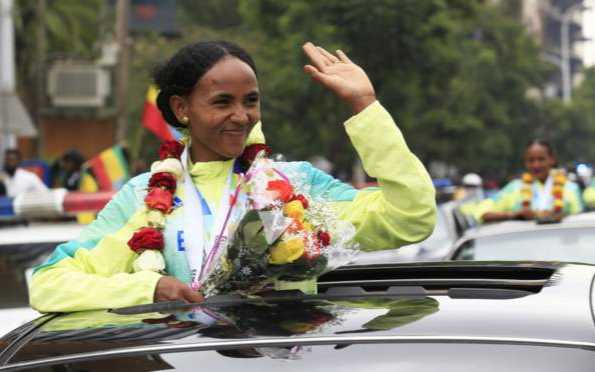 Team Ethiopia received a heroes’ welcome on their return to Addis Ababa from the just concluded World Athletics Championships Oregon22 held in Eugene.

The team had registered Ethiopia’s best result yet at the championships, winning four gold, four silver and two bronze medals and finished just behind the United States in the global medal table.

Top government officials, such as, HE Kejela Merdassa, Minister of Culture and Sport, Mayor of Addis Ababa City Administration, Ms. Adanach Abebe and many other dignitaries were present at Bole International Airport for the first part of the many welcome and appreciation programmes scheduled for the victorious athletes.

Victory Parade After spending the night at the hotel the team were paraded around Addis Ababa’s main venues accompanied by thousands of cheerful and applauding crowds. Members of the delegation were in an open top bus led by medal winning athletes and the federation president, Derartu Tulu, who were in open top Limousines, provided by the national palace for the victory parade ceremony.

Party at the Palace President of Ethiopia, HE Sahlework Zewude, officially welcomed the team at the Jubilee Palace to an event where there were artistic performances and speeches. It was attended by legendary sports personalities, members of the diplomatic community and high level government officials.

All members of the delegation have been rewarded with cheques ranging from the minimum of $1000 for participation to the highest $50,000 for Gudaf Tsegay, who won gold in the 5000m and silver at 1500m.

During the ceremony, Her Excellency President Sahlework Zewudie said, “Our athletes have made Ethiopians to lift our heads with their victories. The victory is more than a medal because it brought smiles to those who are worried, those who are sad, those who have a hard life, and those who wonder where we are as a country.”

The president also said that, “despite attempts to divide us, you have shown that there is no problem at the public level, we may not agree but not hate each other. And this victory is an indicator that there is light in the darkness.”

Derartu’s Plea: Ethiopian Athletics Federation President, Derartu Tutlu, who had received a special 40g gold necklace from the president for her commendable leadership at today’s event, pleaded for both conflicting parties to find a safe way for athletes from Tigray region to meet with their families.

Derartu also reminded the athletes to avoid complacency and start their preparation for Budapest 2023 world championships as early as tomorrow.