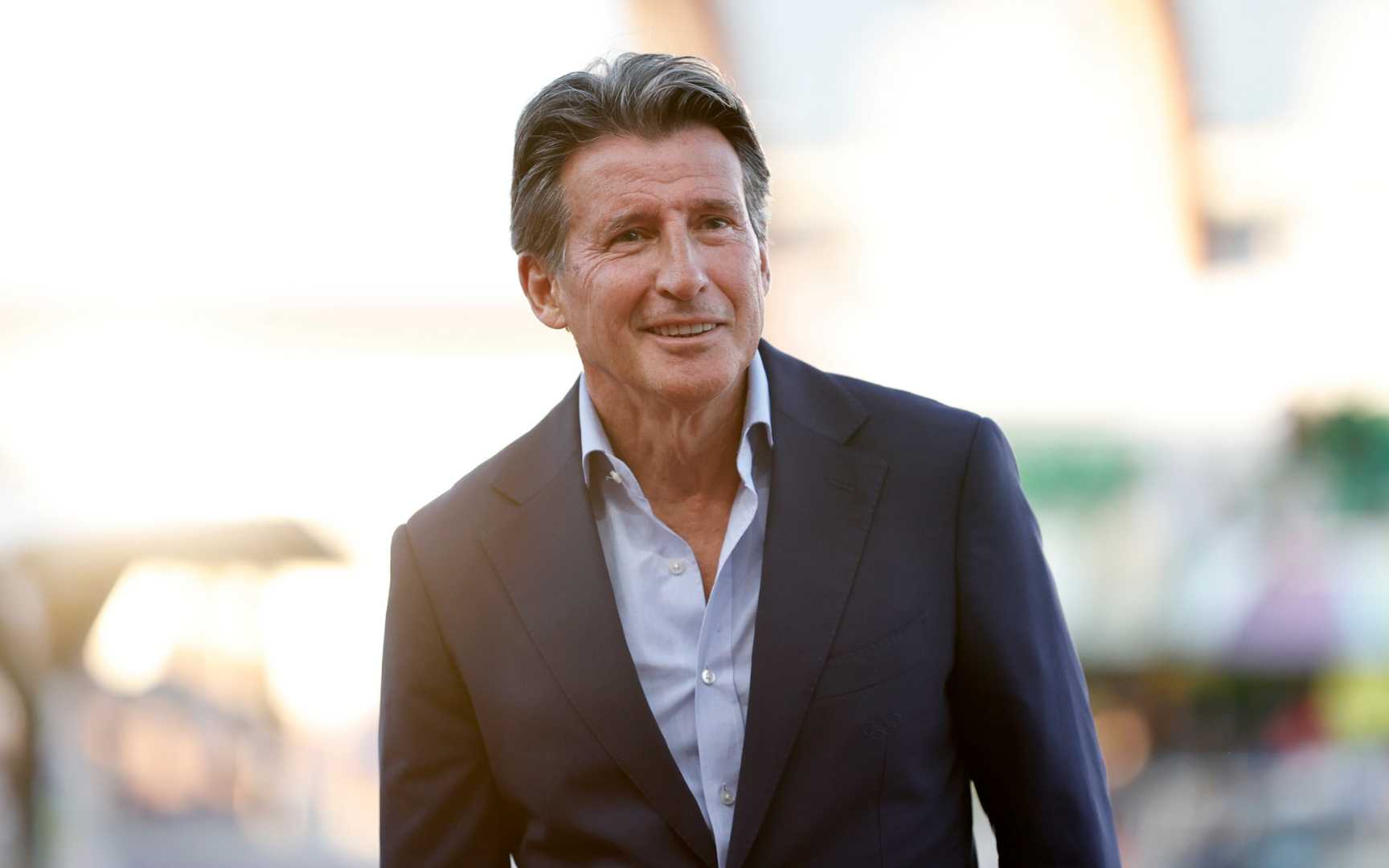 President of World Athletics Sebastian Coe looks on during the closing ceremony on day ten of the World Athletics Championships Oregon22 at Hayward Field on July 24, 2022 in Eugene, Oregon. (Photo by Steph Chambers/Getty Images)
AIPS Media

EUGENE, July 27, 2022 – World Athletics president Sebastian Coe responded to a variety of questions during the end-of-championships press conference of Oregon22 held on 25 July, just before the last evening session of the first ever World Athletics Championships to be held on US soil.

Seb Coe: “We will look at everything that has worked well here and everything that we will want to improve on… So yes the false start rule I’m sure will be looked at by the Competition Commission. Everything is on the table as it always is after championships.”

POSSIBLE NEW FORMAT FOR FUTURE CHAMPIONSHIPS IN TERMS OF NUMBER OF DAYS?

HAVING A FOUR-MAJOR SYSTEM IN ATHLETICS LIKE IN GOLF AND TENNIS?

Seb Coe: “My personal instinct is that athletics doesn’t need that. We have a raft of competitions. Area level, we have championships in all our six continents. We have a really detailed one day series. So I actually genuinely think the World Championships is a standalone. It’s the pinnacle. I don’t think you need to particularly mess with that. I think there may be some discussion about what the format in years to come looks like. But I don’t think you need to start trying to make additional supplementary competitions around it. I think it is what it is, which is you know outside of the Football World Cup, the second largest sporting gathering.”

FILLING THE VOID OF USAIN BOLT?

Seb Coe: “It’s a bit like talking about Muhammad Ali when he left the scene. In boxing we have richness of boxers that follow but nobody’s going to be Muhammad Ali again. We recognize the unique nature that Usain Bolt brought to our sport and contributed to it but I have to tell you, and broadly as I’m looking at it as the president of a global sport, I actually am more optimistic about the bandwidth of talent that is coming through. 40% of the athletes here are under the age of 25 and 51% of them have never been to a world championships before. And when you’ve got the performances that we’ve witnessed in just the last few days, whether it’s Noah Lyles, Erriyon Knighton, Shaunae Miller, Sydney McLaughlin, I mean, where do I start? We’ve got Mondo (Duplantis), he’s a rock star. So yeah, there are absolutely athletes that can. I’m not saying it’s a void, it’s inevitable because Usain is such a unique character, person, talent, but if you look at the times, you’ve got a whole heap of young athletes. So, there or there about.”

WITH THE NEXT WORLD CHAMPIONSHIPS HAPPENING NEXT YEAR, WHAT DOES THIS BUSY SCHEDULE MEAN FOR TRACK AND FIELD?

Seb Coe: “Well, it’s fantastic that we have a World Championships in a year’s time. But that still poses some challenges. It poses challenges for the athletes – you have to say that the athletes dealt with COVID and the challenges of lockdown and lack of, in some cases, municipal training facilities, interrupted programmes, schedules, obviously in terms of training in difficult winter climates as they could not go overseas to warmer climates because of travel restrictions everywhere you look. This has been the most impactful on the athlete. So that has been the first challenge. The upside is if you look at the next six or seven years, we have athletics absolutely centre stage in northern hemisphere terms in the most broadcastable part of the year, but it is going to mean athletes making some quite tough decisions, both about the rhythm and pace of those four or five years. Coaches are going to have to be probably guiding them in a more predictable way because of just not wanting burnout. So I’m really pleased that we’ve got the opportunity to showcase athletics but I don’t minimize some of the challenges that athletes are going to face. Particularly around this season where you’ve got a World Championships, Commonwealth Games, a European Championships, area championships, and there’ll be some crossover as well, because in literally a few days time we’re all in Cali for the under 20 championships and some of our rising stars that have been performing here and are eligible to compete as juniors will be in their national teams. So yeah, it’s a challenge all around.”

Seb Coe: “It’s an important competition. I’ve said this before: the most appropriate audit, the most revealing audit of your sport is actually not, in a way, about what we’ve witnessed here. Fantastic as it is for me, the litmus test is what is going on at junior level. And that is important for two reasons. First of all, you identify the talent, you identify what that talent needs to make the most difficult journey in athletics. Any coach will tell you taking a junior athlete out of the junior ranks and that transitional period into the senior ranks is the toughest and challenging. That’s the period where you have the highest attrition rate. One of the sobering statistics is that the vast majority of athletes that we will witness in Cali that win medals in those championships don’t actually even make it into their senior national team, two or three years down the road. So these championships are really important if you remember we decided not to have the under 18 championships because many of the coaches, many of the Federations felt that that wasn’t a particularly useful test of that stage in the life of a competitor, but the junior championships are really important.”

Seb Coe: “I’ve been to Budapest three or four times in the last few years. I was there just a few weeks ago for the World Swimming Championships which gave me an opportunity to look at different formats – I like to keep across the way other sports are presenting their championships. It also gave me an opportunity to catch up in detail with the Organising Committee there. I’m really happy with the way the event is progressing. I went into the stadium, I think I was formally the first person to actually run in that stadium, although it’s still a bit of a building site, but it will be terrific. The legacy value of the games is going to be really important and I’m really looking forward to being there next year.”

WHEN WOULD WE NEXT SEE MASTERS EXHIBITION RACES, BUDAPEST 2023, TOKYO 2025 or WHEN?

Seb Coe: “Probably not. We looked at this; we looked at it operationally, we looked at it in terms of the status of the sport – Masters has its own vehicle, a very successful one. It has two different iterations. We have Masters in all our other disciplines, we actually genuinely feel that the World Championships can cater for athletes, as you quite rightly pointed, over the age of 35, but as far as I’m concerned and the council is concerned, it’s really important that we hold to the format that we currently have.”

Seb Coe: “Well, first of all, actually, I’m not nitpicking, but it is important to recognize that we haven’t actually had a world outdoor championships in Oceania and we haven’t had one in South America, two of our continental associations. So this isn’t just a unique challenge for Africa. It’s important that you know my views about this. It’s important that we, wherever possible, globalize the sport, and we do take it into new markets, but also to be able to support areas that really do have a passion and a history for our sport. We went through a very open and transparent process. It’s a very different process from the beauty parade that we’ve had in the past. It’s evaluated. We have a bit of an evaluation panel. We have proper metrics, and those metrics are available and are being shared with all the cities not only Tokyo that won (to host the World Athletics Championships in 2025) but also those cities that were not successful on the day. I still have an overarching ambition within the foreseeable future to help Africa to stage a World Championships. And that’s about human capacity, it’s about operational ability, it’s about commercial partnerships. And I think World Athletics recognizes the right for that to be happening at the right moment. We have to sit alongside a local organizing committee in Africa to help this happen. It’s very important.”

Seb Coe: “Well, I had a good opportunity here to speak to the Minister of Sports Olivia ‘Babsy’ Mrs. Grange and she was talking to me about the programme that now sits behind the refurbishment of your National Stadium in Kingston. And when when and if that was achieved that will be a world class facility. I’m sure that Jamaica is ambitious enough to want to stage our world events, whether they’re World Junior Championships – we had a hugely successful one, I think in 2002, it was the championships where Usain Bolt emerged with junior world records. Even discussions about world relays have been mooted. So, it’s about facilities. It’s about operational ability as well. And all those things I hope will be discussed in years to come.”

Seb Coe: “As you know we are now driving very hard our continental tour programme. I’m always indebted to the Kenyan Federation that helps us off the ground with our Nairobi meeting, and we do have the intention to have many more of those in Africa. It’s very important and ambitious. I’d like to see a diamond league event there as well, that’s a slightly different structure. So yeah, we need more competitions in Africa. And those discussions are taking place.