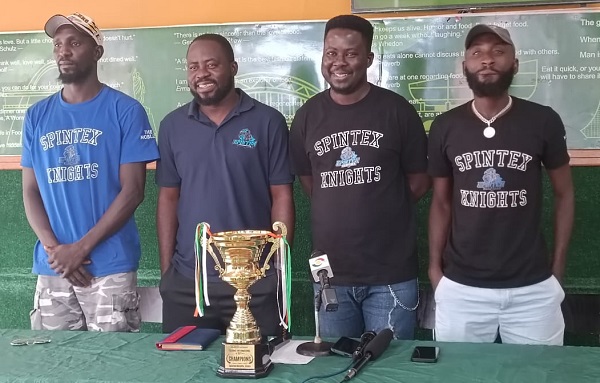 The players and management of Accra Basketball League (ABL) Men’s Division II side, Spintex Knights are on cloud nine after being named the Best Performing Team at last month’s Tournoi International Basketball Tournament in Ivory Coast.

The Knights, Ghana’s sole representatives in the tournament, defeated SEWE 102-91 in their first game, lost to Basketball Africa League qualifiers SOA 81-86 and edged Abidjan-based Africa Sports 76-57 in their final game to finish third.

The Knights received a giant gold trophy and a bronze medal in recognition of their efforts.

All games were honoured at the Palais des sports Treichville in Abidjan, Ivory Coast.

The Head Coach of the Knights, Selorm Thomas said playing against professional teams in an international competition was a good test for his players.

He was hopeful that the experience gathered by his players would be put to good use in the Accra Basketball League.

The captain of the Knights, Elvis Pobi Siaw said his side entered the tournament as underdogs but punched above their weight during the competition.

He was hopeful that with more of such competitions, his side would become a force to be reckoned with on the African continent.

A co-founder and financier of the team, Dr Eric Opoku-Antwi urged corporate Ghana to support local basketball teams in order to develop the sport to an elite level.