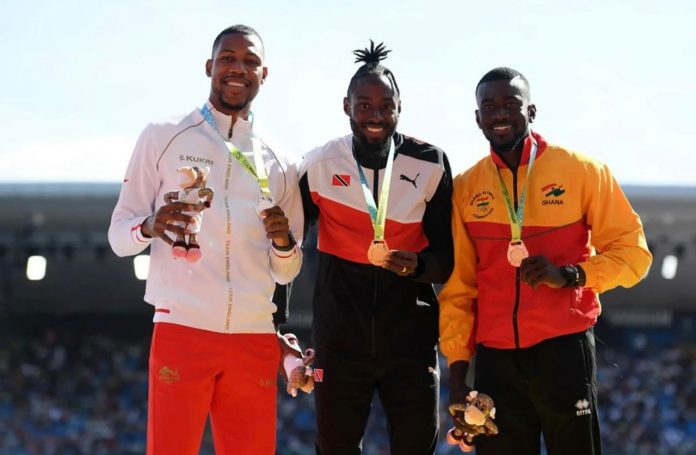 Gun went off. Race started. Off he went. Joe Paul got off the blocks sprightlier than he usually does. He set off beautifully – in his Ghana apparel air had filled like a sail due to how fast he was running.

Each stride on the tartan tracks, majestic. At the end of the bend, the positions had become clearer. Jereem Richards of the Trinidad and Tobago was neck-a-neck with England’s Zharnel Hughes while Amoah had the third position in a safe.

While Richards sped off into first place with about 40 metres to the end of the race, fan favourite Hughes tried to get in behind but couldn’t.

In third place was still Amoah who was running pretty nicely and straining every sinew to get that medal. After he crossed the finish line, he kept running, smiling and soaking it all in. He had just won Bronze for Ghana in sprints.

The country’s first since 1974 when it was under Gen. I.K Acheampong’s repressive military rule. The last man to pick a medal in 200m was George Kofi Daniels (Silver). Daniels did it in a time of 20.97s – a time bettered by Amoah in 2022 by 48 milliseconds.

Moments after finishing the race, Amoah took to his Twitter page and said “Since 1974 lol my mum wasn’t even a teenager. Thank you God” to put into sheer perspective how long it has been since the country won a medal at the Commonwealth Games in sprints.

The retweets poured in like a swarm of bees guarding their honeycomb. It was a good end to a day that was colossally shambolic for Ghana’s Athletics.

Here’s how the Amoah story begins:

It is evening on August 14, 2016, in Accra and the 100m final at the Olympics is on TV. A younger Joseph Paul Amoah was seated in his living room right across from his uncle watching.

The 100m final! It is one of the most watched events across the world. Everyone, athletics lover or not, stays up whatever time of the day it was just to watch and witness the world crown its new fastest man.

Usain Bolt blazed his way to the finish line. It was fast. He finished in a flash, but this wasn’t the best Bolt the world has seen. He finished in 9.81s – 23 milliseconds shy of the world record he set when he came into the Olympics like a mad dog in 2008.

The race had just finished. Bolt and Gatlin were the top two but the man who strangely impressed Joe Paul the most was the young Canadian, Andre De Grasse.

Moments after, he logged into all his social media pages. At the time he had pages on Facebook, Twitter and Instagram. He quickly changed all his usernames; adding 20 to all his names. He added that to his names to signify that he was going to be at the Olympic Games in 2020.

It was courage commingled with hope. Little did he know that his little dream inspired by a 100m final wasn’t too far off.

“I did not know what came over me after that race. I just thought to myself that I could do it”.

Every dream comes with challenges and for Joe Paul, his biggest challenge was that he never felt he was good enough on the tracks as people thought – a form of impostor syndrome he didn’t know he had.

But there was reason to it. He wasn’t the outright High school star and for him, it was largely because he never took the sport as seriously as his teammates back then. He had not gone to high school as a typical sports boy. He knew he was good at it but he wanted to study his business courses rather than spend endless hours on the tracks trying to perfect his times and beat his mates.

His high school, Prempeh College – one of the most prestigious schools in Ghana – had not won their Super-Zonal athletics championship in six years so the onus was on him and his teammates to deliver. \In the final 100m race, Joe Paul came in 4th and it devastated him. It was then that he decided to give it up.

“When I left Prempeh College, I told myself I was going to stop running so when I went to KNUST, the coach, Mohammed Abu.. he had seen me run in high school and he heard that I had gained admission to the school so they contacted me and then I told them I wasn’t going to run. In my last race at the Prempeh College, I felt like I had done my part.” He said with a wry smile as he sporadically stole glances at the screen while on a zoom call.

He quit running for a few months after high school, but pressure began mounting on him when he got into the Kwame Nkrumah University of Science and Technology. Joe Paul has always loved sport. While in Primary school at the Mary Mother of Good Counsel School, he played football, basketball and every other sport that was available in the school’s packed curriculum.

Later, while in Junior High School, he became Sports Prefect. His training for the Olympic Games he says, “started the moment I decided to get back to running in University”

One of the coaches contacted his uncle who cajoled him to get back into the saddle. His uncle had to remind him of why he loved the sport in the first place.

The message was simple “When they contacted me and I wasn’t showing up, I think someone got my uncle’s contact and then they told him that I did not want to join the team so he called me and advised me that if you know how to do something you do not have to let them beg you to do it..”

Getting into the team, however, wasn’t automatic. The KNUST track team back then was monstrous. However, Amoah won the 100m and 200m races in the Fresher’s games. “…that was where I met Martin Owusu Antwi. He was the fastest on the team then so he was happy to have me on as someone who was also doing so well. We trained together and built a great relationship.”

The KNUST track team gave him hope. It was there that he realized that he could do so well for himself if he kept running.

As a Ghanaian athlete of Amoah’s age, there isn’t a tall list of role models to look up to. He has had to do it all by himself – writing his own story for the future generation.

The World Championships came by but he couldn’t quite replicate that same level of form – running 10.36 in the 100m. Aside from Amoah being an individual athlete, he is a team player and every race he has run in the relay team has shown that level of commitment.

At the Olympic Games in Tokyo, he was the anchor leg for Ghana as they smashed the national record. That 38.08 was broken by the same team at the World Championships in Eugene in July leaving it at 38.07.

In that competition, he did not run in the 100m event albeit having a great season in the event before. That got many asking questions.

“It was a collective decision. So myself and my coach as well as other members of the team came together to make that decision. Looking at the schedule between the sprints – the 100m, 200m and the relays, it was a very tight schedule..”

It was a rote response but given how committed he has been for the country. It was one you could let slide. “…Putting it into perspective, I think we made the right choice – not to put too much stress on the body because of how the season went injury-wise.  It was more about the schedule because we had a day between those three events,” he explained.

Ghana to the world

Amoah’s best time in 100m is 9.94s. A time that would have given him the national record if Benjamin Azamati was from another country. The competitiveness between the two has been good for the sport in this country.

“We spoke when he ran 9.90. I remember calling him and asking what is wrong with him? We are just trying to put Ghana on the map,” he laughed heartily as he ended his sentence.

Beyond that, the two have a great relationship. It is particularly Joe Paul’s dream that his crop of athletes become well-known names across the world.

“These are the moments that we were waiting for Ghana athletics. We have been waiting and it is good for our athletics because we would like to go home for national championships and people will be waiting to see two or three or four people take it to each other.”

This definitely spells good things for Ghana. Joe Paul, Benjamin Azamati, Sean Safo-Antwi, Joseph Oduro Manu and Emmanuel Yeboah make up a great senior squad. Coming through the ranks are Barnabas Agerh, Edwin Gadayi, Abdul Saminu, Solomon Odonkoh and Fuseini Ibrahim who have owned the local space for some time. All of them hoping that one day they can finally make the step up to become top national athletes.

So as Joseph Paul basks in his bronze medal win, he will get back to the tracks again to train with Black Sherif’s ‘Kweku The Traveler’ in his ears. He knows he is on a journey and it is not a journey that ends with only a bronze medal.