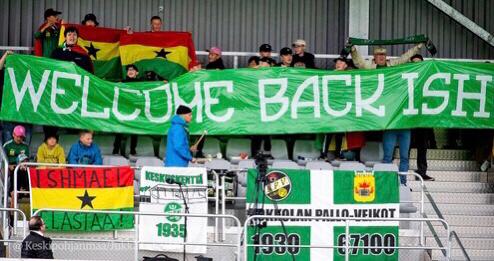 Ghanaian winger, Ishmael Yartey was greeted with a massive reception at Finnish Veikkausliiga side, KPV Kokkola as he made his second debut for the club on Saturday.

On Saturday, fans of the Kokkol-based club carried banners bearing the name of the Ghanaian and the Ghana flag to their Kokkolan Keskuskenttä to welcome the ex-Benfica youth team attacker.

Manager Christian Sund handed him a starting role in the attack and he lasted 63 minutes in a game KPV should have won hands down.

In the 16th minute, the former Ghana U-17 winger cut in from the left before unleashing a powerful drive that was palmed away by the visitors’ goalkeeper.

Greek defender Charalampos Chantzopoulos scored the opening goal for KPV at the 27th-minute mark but 34-year-old Esa Terava cut off the lead for the visitors as the game ended 1-1.

Yartey, a former Sochaux and Benfica attacker spent a half season at the Kokkolan Keskuskenttä in the 2019/20 season.