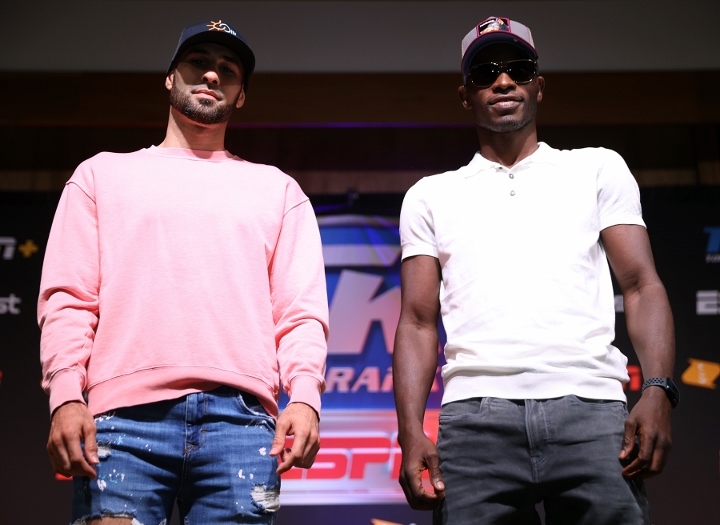 Pedraza-Commey, Anderson-Rovcanin and Torrez-Canedo will be broadcast live on ESPN, ESPN Deportes and ESPN+ at 10:30 p.m. ET/7:30 p.m. PT.

“Same as Richard, I’m coming off a loss. I’m looking for a big win and to stay among the top names in the division.”

On his recent loss to Jose Ramirez

“I believe I need to be more active, to be more offensive in this fight.”

“A big win on Saturday against a great fighter like Richard Commey will put me a step closer to a world title opportunity. That’s what we’re looking for.”

“He has a strong right hand. He’s a strong fighter that punches hard with both hands, and we have that in the game plan, so we’re going to be working on that. I’m expecting a tough fight against a strong fighter.”

“It’s very important because I lost my last fight in December. It’s an opportunity to get back to winning ways, and this is my first fight at 140. I just want to announce myself.”

On his loss to Vasiliy Lomachenko

“I wasn’t very active going into that fight. I stayed away for too long, and I feel like I was rusty. It is what it is. It happened. We share the same opponent twice {Lomachenko and Ray Beltran}. It’s a good fight and I’m looking forward to it.”

“This is what I do. I fight, so it doesn’t really matter. God knows best, and he knows this is the right time for me.”

“I’ve been back in the gym since I got back from Ghana in March. I always train hard and work on myself because I know boxing is not an easy sport. You have to be ready before you get in the ring, so I always make sure I’m 100 percent ready.

“I’ve been enjoying it, just happy to be here. A blessing to be here. Hopefully, I can take everyone with me along for the ride.”

On changing to southpaw in his last bout

“It was really to switch some things. We had been trying things in the gym. I thought it would knock him off his confidence and give him a different look, which it did. It confused him, and then when we switched back in the second round, he didn’t know what to do and it ended in a knockout.”

On Rovcanin potentially being is his toughest foe to date

“No, I have not been able to get a lot of footage {on Rovcanin}. And, also, I don’t know. He could be. It’s possible. I guess I won’t know until I get in there because I only really had one fight to watch. I’ve definitely had some tough opponents in my career so far. I think Rodney Hernandez was real tough. Also, Kingsley Ibeh was real tough. I think they took some pretty hard shots before going down, so we’ll see.”

On sparring with Tyson Fury

“In all honesty, he’s a real good dude. I enjoyed my camp. I guess I’m over the learning experience now. It’s time to become the teacher now, I guess. I’m happy he showed me everything he did, but he said he’s finished with his career. Like I said, it’s time to be the teacher now.”

“I appreciate Top Rank and ESPN for this opportunity. My whole life, I’ve been hoping for this chance, to fight in the United States, and we are expecting a fair fight. We are going for the win. We are expecting to win.”

On his pro journey thus far

“Honestly, it’s the people I meet. I have made brothers along the way. Guys like Jared, guys like Tiger, all these guy I’ve met along the way and have been able to share this journey with.”

On his father/trainer/manager Richard Torrez Sr.

“My dad is a man of many hats. He wears the dad hat, he wears the coach hat, and he wears the boss hat. So, it’s really good to be able to have this entire journey with him. I’m a firm believer that you need an omnipotent {figure} in your corner. And to have my dad there, if he tells me to drop my hands and quack like a duck, I’m going to. To be able to have him in the corner and have full trust in my corner, I feel it’s like a cheat code.”

“Hopefully, I get rounds in, but at the end of the day, I hope that shows the amount of hard work I did in preparation. I’ve been grinding at the Olympic Training Center and back home in Tulare. There’s been a lot of work and hard work to go into those one-round and two-round {fights}.”

“It’s always a beautiful thing to come home. A lot of professional boxers never get an opportunity to fight in their hometowns. I got my momma here, I got my people. It’s a lot of love. I’m on a big stage. Of course, there are a lot of heavyweights on this card. So, it’s all action, baby, and I love it.”

“Just turning pro has helped my game a lot, moving off to Vegas, getting a lot of different opportunities, sparring with a lot of the top guys, being seasoned as a pro, actually living the pro lifestyle. I just keep climbing and growing.”
Saturday, August 27