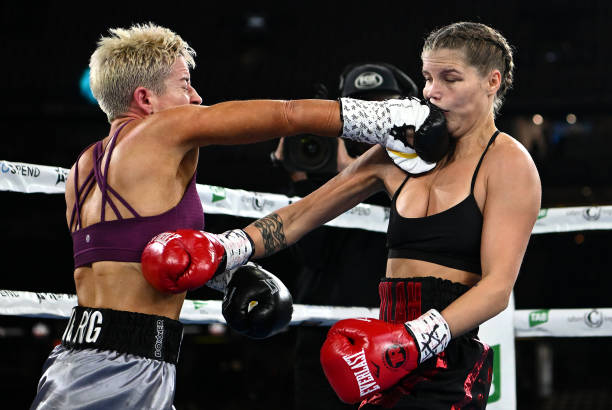 MELBOURNE, AUSTRALIA - JUNE 05: Sarah Higginson lands a punch to Taylah Robertson in the undercard fight before the World Lightweight Championship bout between George Kambosos Jr. of Australia and Devin Haney of the United States at Marvel Stadium on June 05, 2022 in Melbourne, Australia. (Photo by Quinn Rooney/Getty Images)

Sarah Higginson looks to break into the world ratings this weekend as she challenges for WBA Oceania Light Flyweight championship in Metro City, Perth, Australia.

MELBOURNE, AUSTRALIA – JUNE 05: Sarah Higginson lands a punch to Taylah Robertson in the undercard fight before the World Lightweight Championship bout between George Kambosos Jr. of Australia and Devin Haney of the United States at Marvel Stadium on June 05, 2022 in Melbourne, Australia. (Photo by Quinn Rooney/Getty Images)

Higginson discussed her experiences prior to leading into her WBA Oceania title fight this week in Perth.

She said, “I’ve had some great experience challenging some top quality fighters in my last two fights, and that has proven invaluable. I’ve really feel I’ve improved in the gym since, and now I’m ready to break into the world rankings and work myself up the world ratings.

“I want to thank Dragon Fire Boxing, Tony Tolj and the WBA for giving me this opportunity. I’m incredibly grateful to be getting another chance at fighting for a title, and a fight I believe I can win and show that I’m an improving fighter.

“I am very proud that two female fighters are headlining a Dragon Fire Boxing event. Female boxing is on the rise around the world, and I’m glad that women’s boxing is getting the attention in Australia like it is doing elsewhere.”

The event, which also includes rising standouts Jordan La Ruccia 3-0, who appears to be on a collision course with Nikita Tszyu and in a unique situation, former Warwickshire cricketer Ryan Daye makes his professional debut. Joining these two is Bahtiyar Sonyol and amateur standout Ben Innes.

Tolj said, “I’m excited for this card, it’s a fun card and really shows how we value grass roots pro boxing and also female boxing. I think this main event is good for Australian boxing. Women deserve the right to headline events, and we want to support that movement & its the first time in Western Australian boxing history a Womens fight will headline and also the first time we will have 3 pro womens boxing fights on the 1 night.

“We’ve got some interesting stories on the undercard, such as an opening batsman making his pro debut. So I expect a 6 star performance from him!

“Jordan La Ruccia is on a collision course with Nikita Tszyu, that’s a fight that can definitely happen down the line, so it’s worth keeping an eye on his development this Friday night. Ryan Daye and Ben Innes are also in action, and they’re going to be in fun fights, so it’s definitely not one to miss for local boxing fans in Perth.”