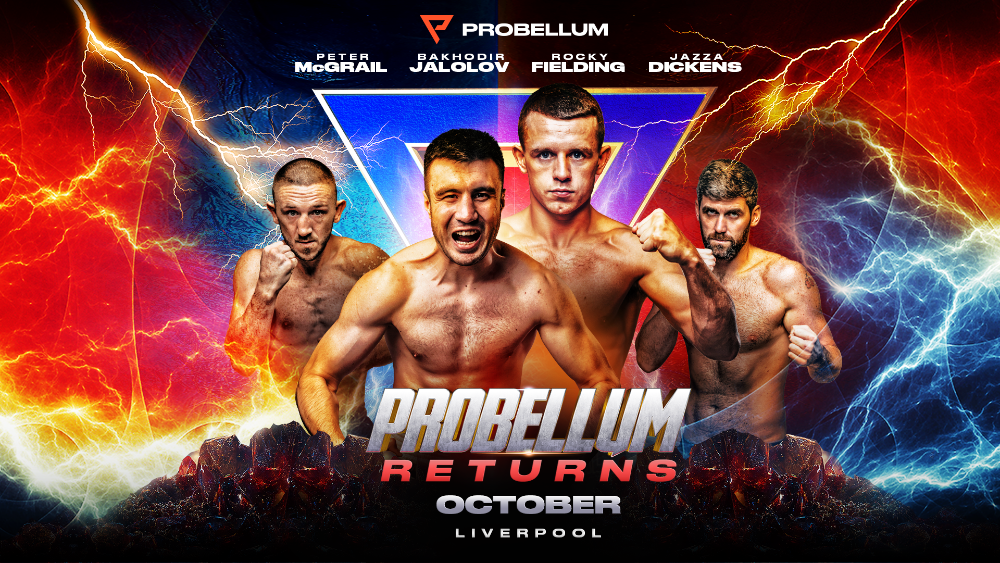 Hometown hero Peter McGrail headlines his first major show in Liverpool next month alongside some of the city’s top boxing stars.

Probellum returns to the famous fighting city in October after the success of Probellum Liverpool in April when headliner Paul Butler set up his undisputed bantamweight blockbuster with Naoya Inoue, by winning the WBO title with a masterclass display against Jonas Sultan.

But it is world-champion-in-the-making McGrail who is the headline attraction this time and the local hero will be joined on the card by Uzbekistan’s Olympic gold medallist – and heir-in-waiting to the heavyweight throne – Bakhodir Jalolov, who carries with him a frightening 100% KO record.

The older McGrail brother (4-0, 3KOs) dazzled at Probellum’s debut Liverpool show and will take centre stage in front of his growing legion of fans next month as his journey towards the top of the super bantamweight division moves up a gear.

Peter McGrail said: “It has been a long-held dream of mine to headline a show in Liverpool but to do so, with an undercard as strong as this one, makes this even more special.

“The level of talent on show at Probellum Liverpool is set to be scarily good and as the headline fighter, I am determined to showcase why I am a future world champion.

“The rest of the card is excellent; Jalolov will be heavyweight world champion one day, Jazza and Rocky are pushing to get world title shots again and my brother Joe is flying this year.”

Heavyweight destroyer Jalolov (11-0, 11KOs) continues his march towards the summit of boxing’s marquee division by fighting in the UK for the first time as a professional.

Jalolov, known as ‘The Big Uzbek’, brings devastating punch power to Liverpool and is ready to reinforce his reputation as the heir to the heavyweight throne.

The 6’7” puncher won gold at the Tokyo Olympics and there is a rapidly growing belief that Jalolov will take over the division in the coming years.

Probellum President, Richard Schaefer said: “I’m delighted that Probellum returns to Liverpool with such a brilliant fighter as Peter McGrail as our headliner.

“Peter is quickly becoming a hero in the city, and this is a landmark moment in his journey to the top of the super bantamweight division.

“Popular fighters like Peter, Rocky and Jazza would pack the arena out by themselves but being able to add the UK debut of Jalolov into the mix makes our return extra special. McGrail and Jalolov are both headed straight to the top of the world, so this is a card that you don’t want to miss.”

Fan favourite Dickens (31-4, 12KOs) is breathing down the necks of world champions Leigh Wood and Josh Warrington and has publicly called out both to put their belts on the line against him.

And while the two-time world title challenger waits for his next opportunity, he will aim to turn the heat up on his 126lbs rivals with a statement display, following April’s stunning stoppage of Andoni Gago.

Fielding (30-2, 18KOs) wants a chance to reclaim the world super middleweight title he won in 2018 and will use Probellum’s return to reinforce his credentials for another shot at the belt.

Ranked highly by the WBA, the 35-year-old is well-placed for a second tilt at world glory and knows an impressive win in his hometown will only aid his cause.