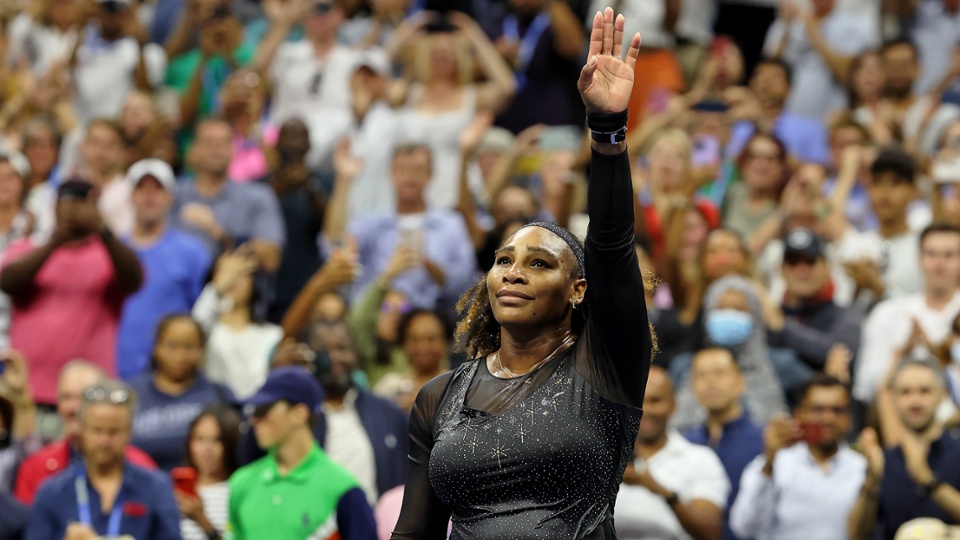 WHAT HAPPENED: The most dominant women’s tennis player of the Open Era bid farewell to the sport on an emotional Friday night at the US Open.

Serena Williams, only weeks away from her 41st birthday and ranked an unfamiliar No. 605, had captured the imagination of sports fans everywhere this week as she made one last run at Margaret Court and her all-time benchmark of 24 Grand Slam singles titles, prompting sellout after sellout in Arthur Ashe Stadium and record TV viewership worldwide.

In the September issue of Vogue, Williams announced that she was preparing to wrap up her tennis career, evolving, not retiring, into the next chapter of her life. It was fitting that the American, whose impact stretches far beyond the lines of a tennis court, would play her last match here in Flushing Meadows, where she first broke through as a teen in 1999, and where she captured a tournament co-record six trophies.

“I thank everyone that’s here, that’s been on my side for so many years, decades, literally decades,” said Williams through tears on the court. “It all started with my parents. They deserve everything. I’m grateful for them. These are happy tears, I guess. And I wouldn’t be Serena if it wasn’t for Venus. Thank you, Venus. She’s the only reason Serena Williams ever existed.

“It’s been a fun ride. It’s been the most incredible ride and journey I’ve ever been on in my life.”

“What she’s done for me, for the sport of tennis, is incredible,” said Tomljanovic of Williams. “I never thought that I’d have a chance to play her in her last match. I remember watching her as a kid in all those finals. This is a surreal moment for me.”

“I think she embodies that no dream is too big,” added Tomljanovic. “It doesn’t matter where you come from, the circumstances, you can do anything if you believe in yourself.

Tomljanovic, 29, came into the match in peak form, having won 15 of her last 19 matches. Like Danka Kovinic and second-seeded Anett Kontaveit before her, she got an up-close-and-personal glimpse of what it’s like to face an icon on her home turf, 29,000-plus partisan souls seemingly rooting against her.

The self-described ‘Serena 2.0,’ her hair bejeweled and moving better than she has in years, looked to be in control of the opening set when she broke her opponent at love for a 5-3 advantage. But the Serbian-born Tomljanovic, a two-time Wimbledon quarterfinalist, stood her ground, reeling off four unanswered games to steal the set.

Serving at 0-1, 30-40 in the second set, Tomljanovic could only watch as Williams put away a nifty backhand volley for the break, reigniting both herself and the crowd. But the Aussie wasn’t done. She would save four set points in the 15-minute-long eighth game of the set to pull to within 3-5 before leveling the proceedings at 5-all. Amidst chants of “SERENA! SERENA!” the stanza headed into a tiebreak, Williams finally making good on her fifth set point to force a decider.

Tomljanovic broke for 3-1 in the final set, never to trail again, the most memorable victory of her career in hand. She needed six match points to close out the three-hour, four-minute thriller.

How did Tomljanovic handle the nerves?

“I just thought she’d beat me,” she laughed. “The pressure wasn’t on me—she’s Serena. Even until the last point, I knew that she was in a really good position to win, even when she’s down, 5-1. That’s just who she is. She’s the greatest of all time, period.”

Williams’ only other third-round defeat at the US Open came against Irina Spirlea in her 1998 debut.

Next up for Tomljanovic is Liudmila Samsonova, who ousted Serb Aleksandra Krunic, 6-3, 6-3. They are an even 1-1 in head-to-heads.

Tomljanovic recovered from 3-5 down in the final set of her second-round matchup with Evgeniya Rodina, two points from defeat.