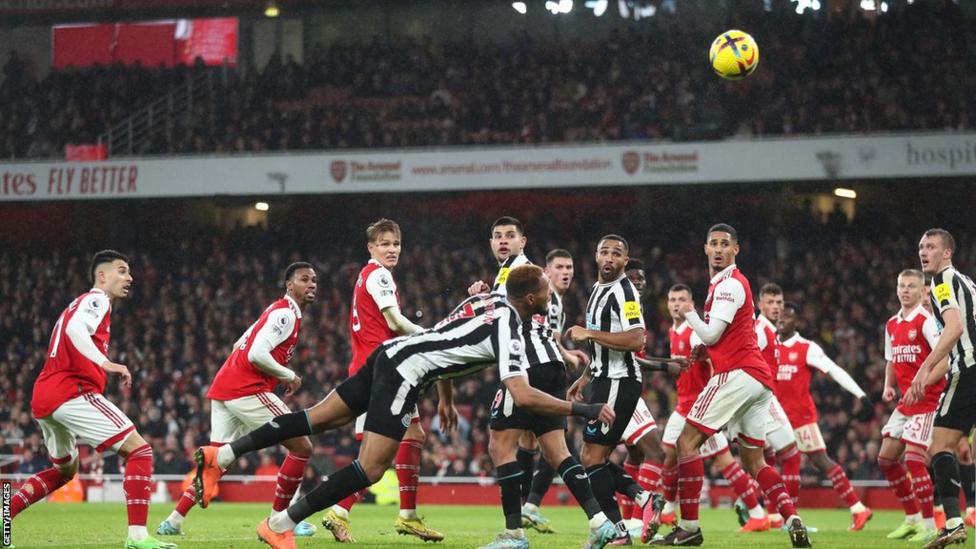 Arsenal were hoping to extend their lead at the top of the table to 10 points but found themselves drawn into an attritional and dogged encounter by a Newcastle Untied side with top four ambitions of their own.

Chances were at a premium and Newcastle’s Joelinton arguably wasted the best of all when he headed wide with the goal at his mercy in first-half stoppage time.

Arsenal went close through defender Gabriel and forward Gabriel Martinelli, who both sent headers narrowly off target, while Newcastle keeper Nick Pope made a crucial late save with his legs from Eddie Nketiah.

The Gunners also appeared to have a clear penalty claim rejected when Gabriel was hauled back by Dan Burn.

The game descended into a scrappy affair with seven yellow cards and the deadlock remained unbroken, with Arsenal’s lead now eight points despite being held at home.

It may only be early January but Arsenal manager Mikel Arteta’s frantic touchline behaviour perhaps gave an insight into the growing expectations surrounding the Gunners after their superb season so far.

Arteta was on the edge of his technical area for so much of the night right until the end, confronting fourth official Jarred Gillett when only five minutes were added on at the end then moving towards opposite number Eddie Howe after late penalty appeals were rejected before being ushered away.

It certainly did not give off an air of calm when one was needed as Newcastle’s determined defensive approach and desire to drag Arsenal into a dogfight led to frustration all round.

When Arteta calms down he can still assess a job being well done but this was a night when his Arsenal team ran into a formidable barrier in the shape of Newcastle, their work deteriorating after a bright start, although they still nearly snatched it at the end through Nketiah.

Arsenal still have that eight-point lead, although Manchester City have a game in hand.

It was never going to be all plain sailing for the Gunners and this was one of those occasions, the demeanour of Arteta reflecting what Newcastle will regard as a highly satisfactory outcome.

Newcastle’s run into the top four ran into resistance against Leeds United at St James’ Park but showed they can dig deep themselves as they battled to earn a crucial point at Arsenal.

Manager Eddie Howe will be delighted with both the performance and the result, although he will know it might have been even better had Joelinton converted a relatively simple headed opportunity.

This will be a minor complaint overall as Newcastle showed they were prepared to fight for everything, over-zealously in the eyes of some Arsenal fans, but they will not care and nor will the Toon Army, who noisily celebrated the point at the final whistle.

Newcastle were well organised, tried to threaten when they could and reaffirmed the huge improvement they have made under Howe and with the influx of cash from their Saudi Arabian owners.

The top four was a pipe dream at the start of the season but Newcastle are genuinely in that conversation now and showed why as they earned what could be a vital draw.