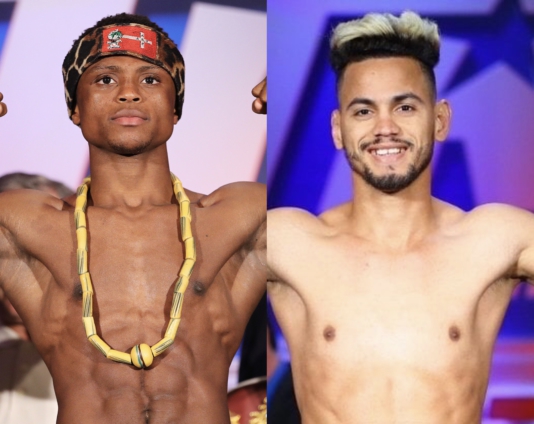 The former World Champion has Ramirez between him and the accolade two-time world champion as the two clash for the WBO featherweight title which was rendered vacant as a result of Emmanuel Navarette’s move to the super featherweight division. Madison Square Garden in New York could just be the ground for Dogboe to write his history if he gets it right.

In an exclusive interview, Dogboe who turned champion at super bantamweight in 2018, said he had the responsibility to bring Ghana international sports glory this year following the unfortunate early exit of the Black Stars at the Qatar FIFA World Cup.

“Back in 2018 when I was about to fight for the world title, Ghana’s international image had seen a bit of a dip and I felt that my win lifted the spirits of the people.”

Dogboe emerged winner from a split decision against Joet Gonzalez to book this ticket. That result also earned him the WBC International title, shooting him into the number two contender position.  The Ghanaian is also required to stage a final eliminator for the WBC belt but wants to concentrate on the March assignment for now.

He heads to Washington DC where his trainer Barry Hunter takes over to get him in shape via an intensive training camp. “I don’t watch boxing during my leisure hours. I’ll only do that when I need to pick a trick or two”

Ramirez strikes a chord with boxing people with his big Olympic credentials. The two gold medals from the 2012 and 2016 editions have given him a spring to start off well in the pro ranks. With only a loss in the 12 bouts

a 68 % knockout ratio, the Cuban southpaw couldn’t have looked any better for a big day.

Dogboe on the other hand is a London Olympian but hardly won a medal. “I was at the Olympics too. I did not win a medal but became a world champion,” he told Joy Sports.

“I am always ready to fight anybody provided there is a title at stake. I am ready to get the job done. Ramirez is good but he hasn’t fought anyone like me,” he said.

After the only two losses in his career between 2018 and 2019 to Emmanuel Navarette,  Dogboe (24-2, 15kos) moved up to the featherweight division and has been successful so far – Chris Alvalos, Adam Lopez, Christopher Diaz and Joet Gonzalez being his victims.

Success on March 18 will mean Dogboe will become second on a growing list for former champions who have won world titles on two or more occasions.

Former IBF bantamweight champion Joseph Agbeko remains the only one amongst Ghana’s 10 champions to have lost and regained championship status. Agbeko lost his title to Yohnny Perez in 2009 and reclaimed it from the same opponent in 2010. And in 2013 he won the IBO title at home after defeating Luis Melendes.

A major announcement of the bout will come off at the African Regent Hotel in Accra on Wednesday.