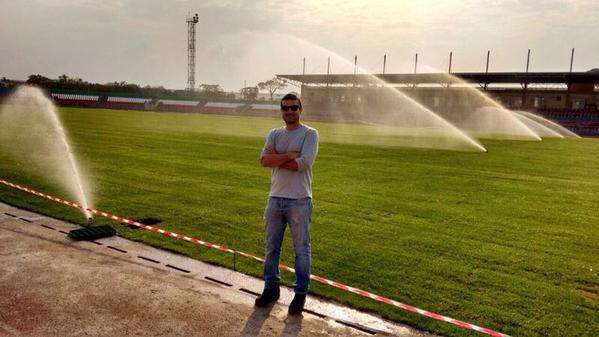 Equatorial Guinea have relaid their Mongomo pitch for the 2015 African Cup of Nations after importing a new football pitch from Spain.

We earlier reported about the poor state of the football pitch in Mongomo, the place where the Black Stars of Ghana will be based for the 2015 AFCON tournament.

Equatorial Guinea however were confident of their readiness for the tournament in January with the president of national government projects,Francesca Obiang telling BBC at the time:

“Time is a big challenge but the good thing is that it is not new to us to work against time. We have done that when we built Sipopo and we have built that in two years.

“It Is extremely difficult because normally people prepare for two years because at the same time they decide they want to host it for this we are doing it to save the reputation of Africa more than anything so we have to take all the risks and all the responsibilities even though we did not ask for it.

“No single country an afford something like this because it is very hard and it is very expensive and we are talking about time that we do not have so it is very stressful but we will make it.”

The host nation have fulfilled their promise with the Mongomo pitch with a massive overhaul and looking great for the beautiful game.