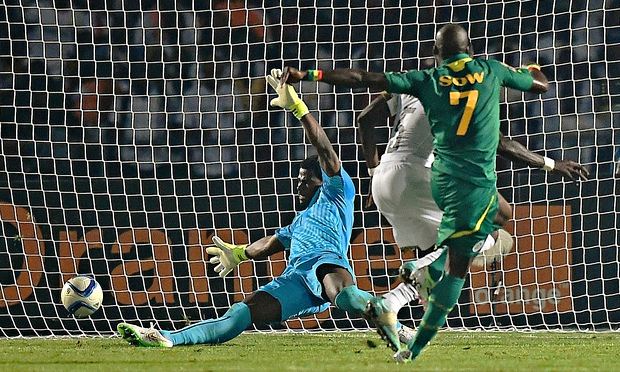 Moussa Sow grabbed a dramatic late winner as Senegal opened their Africa Cup of Nations campaign with a 2-1 win against Ghana in Group C.

André Ayew put Ghana in front from the penalty spot but Mame Biram Diouf grabbed the equaliser as Senegal heaped the pressure on after the interval.

Sow, a substitute, was on hand to win it with the last kick of the game and get his country off to a winning start in Equatorial Guinea.

Ghana had the better of the early stages without offering too much of a threat and needed a penalty to make their possession count in the 14th minute. Everton’s on-loan Chelsea winger Christian Atsu broke clear through the middle and was felled by Bouna Coundoul as he tried to go round the Senegal goalkeeper, who was booked for his troubles. André Ayew converted.

Senegal were struggling to make an impact but looked dangerous when they did get opportunities. Kara Mbodji’s header brought a save from Brimah Razak and Diouf did the same with a spectacular overhead kick just after the half-hour.

Senegal started the second half stronger and after Papakouli Diop had dragged a shot wide Diouf grabbed the leveller in the 58th minute. With Jordan Ayew off the field, the ball was launched into the Ghana box and Diouf headed against the post but showed superb awareness to get to the rebound and nod home.

The Stoke striker then had a glorious chance to put his side ahead but could only blaze over the bar after the ball reached him 12 yards out. Jordan Ayew fired a free-kick over the bar but Alain Giresse’s men continued to have the better of the closing stages and Dame N’Doye saw a header blocked in the box before Diop dragged a shot wide from the edge of the area when he should have done better.

The pressure eventually told with the last kick of the game as a long ball over the top found Sow, who played the ball to Henri Saivet. The Bordeaux striker then fed Diouf who slipped the ball back to Sow and his low finish sealed victory.