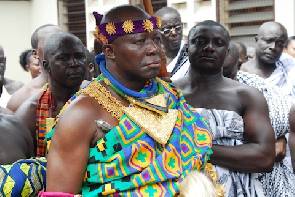 There still remains a huge uncertainty over who will be appointed to run the affairs of the club.

Former Ghana defender Samuel Osei Kuffour months ago revealed he will be handed the job as President to run the club.

But the club owner Otumfuo Osei Tutu II is rumoured to have had a change of mind in making that appointment and is in discussions with other candidates.

And even though the current board led by Paul Adu Gyamfi are still running the club, there remains a huge uncertainty over the future of the club.

And Ashanti Regional Circles chairman Obeng Sekyere wants this era of uncertainty cured with an immediate announcement from the club owner.

“There is a lot of uncertainty over the future direction of the club and I think it is destabilizing the club,” he told Happy FM.

“I feel it will be proper for the club owner to come out once and for all to make it clear who is to lead the club to settle all these uncertainties.

“We are not participating in Africa after all so this is the right time to make things clear.”
source:ghanaweb.com