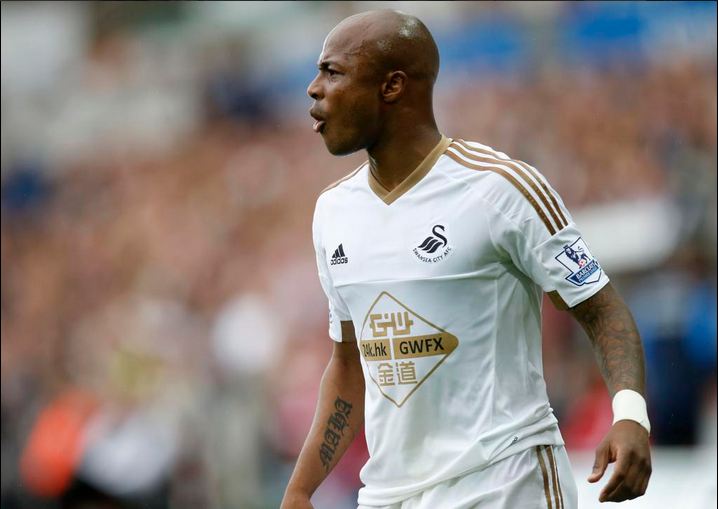 His award in Kampala was received by the CEO of FUFA Edgar Watson, who will forward it to the Ghana FA for onward presentation to Ayew as the Swansea City player was unable to attend the event because of club commitment.
The event, which saw the biggest names in Uganda football in attendance, recognised the Swansea City player ahead of the other superstars thanks to his performance for both club and country over the past 12 months.
Despite being a midfielder Ayew emerged as the joint top scorer at the 2015 Africa Cup of Nations in February, steering the Black Stars to the final only to be beaten by Ivory Coast in the final on penalties.
He continued his heroics from February by scoring 12 goals in 14 matches for French giants Marseille from his midfield position and did not stop when he moved to Swansea in the summer as he is currently their highest scorer.
Votes were taken from fans across Uganda and Ayew emerged ahead of all of them, hugely boosting his chances of winning of 2015 CAF African Footballer of the Year award.
Ayew has been named in the final three-man shortlist for the awards ceremony to be held in Nigeria early next year.
The winners will be decided by votes from Head Coaches or Technical Directors of the National Associations affiliated to CAF and winners be announced on 7 January 2016 during the Glo-CAF Award event to be held at the International Conference Centre, Abuja, Nigeria.
Key people in Uganda football gathered at Speke Resort Munyonyo’s Victoria Hall to honour the people who excelled in 2015.
Full list of award winners at the 2015 AIRTEL FUFA Awards Gala
Fans Favourite African Player of the Year (Foreign): ANDRE AYEW
Fans Favourite player of the year (Local): TONNY MAWEJJE
Male Footballer of the Year: FAROUK MIYA
Female Footballer of the Year: SANDRA NABWETEME
Coach of the Year: FARIDAH BULEGA (Wakiso United)
Beach Soccer Player of the Year: DOUGLAS MUGANGA
Referee of the Year: MARK SONKO
Fair Play Award: SC VILLA