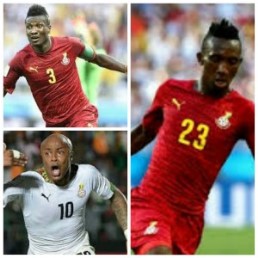 Black Stars trio Asamoah Gyan, Andre Ayew and Afful Harrison will be facing each for the 2015 SWAG player of the year award.

The names of the candidates were released on Monday in a press briefing at the Accra Sports Stadium chaired by the President of SWAG, Mr Kwabena Yeboah.
The trio played an instrumental role for their respective clubs and also helped the Ghana Black Stars team to win silver at last year’s African Cup of Nations held in Equatorial Guinea.
Gyan in the summer after moving from Al Ain to Shanghai SIPG helped the Chinese top-flight to finish the season at the second position.
However, Andre Ayew before switching camp from Marseille to Swansea was marvelous for the French side and in his first month in the EPL he was voted the Barclays Premier League player of the month.
Andre last Thursday in Abuja lost the prestigious African Footballer of the Year award to Pierre-Emerick Aubemeyang while Harrison Afful won silver in the MLS after his Columbus Crew side lost the trophy to Portland Timbers.
Harrison beat Andre and Gyan to the award last year and the three have come up again this year.
The award is scheduled to be held later in the year.