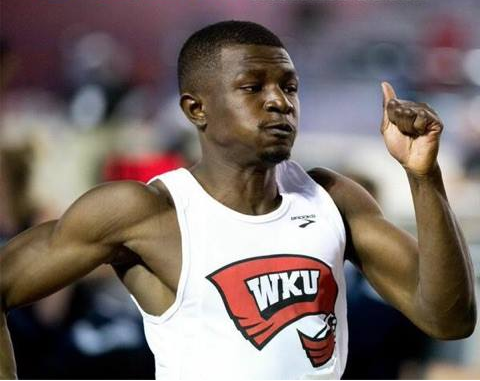 WKU Track and Field junior Emmanuel Dasor was named the league’s Male Track Co-Athlete-of-the-Week after his record-breaking performance in the 60-meter dash this past weekend at Vanderbilt’s Commodore Invite. Dasor shares the honor with Middle Tennessee’s Eliud Rutto.

Dasor captured the 60-meter dash event at the Commodore Invitational this past weekend on the campus of Vanderbilt University with a program-best time of 6.68 seconds. The time broke the program record of 6.71 seconds set by current senior Ja’Karyus Redwine in 2014 and is good for No. 13 in the NCAA so far this season.

Dasor was also a member of a Hilltopper 4x400m relay team that finished with a mark of 3:09.84, currently the fifth-best time in the nation.

Dasor’s honour marks his second of his career after he took home the honour exactly a year ago today on Jan. 20, 2015. The award also marks the second consecutive week a member of the men’s indoor track and field team has been honoured as senior Ventavius Sears took home the award last week after a stellar performance at Purdue’s Gene Edmonds Invitational.

The WKU men’s and women’s indoor teams are set to resume action this Friday, Jan. 22, at the two-day Rod McCravy Memorial on the campus of the University of Kentucky.