GFA must be serious – Nyaho Tamakloe 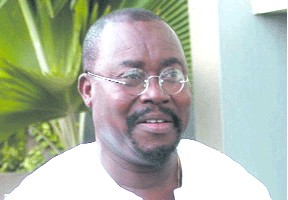 Dr. Nyaho Tamakloe who served as FA President from 2004-2005 has called on the Ghana football association – GFA to be on the alert as the Ghana premier league’s decline from ‘grace’ is gradually heading closer to the ‘grass’.
The GFA announced after an executive emergency meeting a couple of weeks ago February, 20 as the start date to the new Ghana premier league season. The league has been delayed due to club wranglings involving, newly promoted club Techiman city and Wa Africa united and also Dreams fc and Tema youth. Clubs have been dormant without league games and some have cried as their financial budget for the 2015/16 season has already been reduced and the league set to commence without a headline sponsor means clubs will find life in the league very difficult to operate within.
Nyaho Tamakloe who is noted for his vociferous and tough speaking act has fingered the FA for the situation clubs find themselves in and has cast doubt on how effective the league will be should it start as planned.
In an interview with Boss fm 93.7, Dr. Tamakloe said, “playing the league without a sponsorship deal will take a huge toll (financially) on the clubs. However if the FA is serious then they will figure out a solution and then we will have a smooth league.”
The GFA has called on the various clubs to be active in finding sponsors for their clubs and resist depending solely on league sponsorship as that is not a solution to their financial challenges.