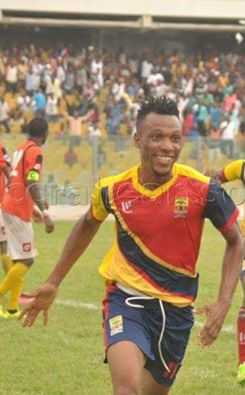 Hearts striker Samuel Yeboah has set a 20-goal target for the season.
The veteran attacked grabbed the headlines after scoring the decisive goal in his side’s 1-0 win over New Edubiase in the season’s opener last week.
And the former Heart of Lions arrow man wants to hit double figures in his debut season at the club.would help him achieve the target.
“I have a great relationship with my teammates. I believe our strong bond will help me achieve my goal target,” he told Graphic Sports
The 29-year-old, who had had stints with some clubs in Europe, disclosed that he was training very hard to get a starting role in Coach Kenichi Yastuhasi’s side to get more playing time to make it possible to meet his target.
“You can only score more goals when you get more playing time. I am training hard to get a starting position in the team.”