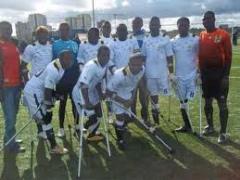 Members and management of the Amputee Football National Team, the Black Challenge, would be joined on Wednesday, March 16, 2016 by other Persons with Disability (PWDs) to demonstrate against government’s failure to pay outstanding expenses made to represent Ghana in international tournaments.

The management of the Black Challenge deems the demonstration very crucial in its quest to draw government’s attention to the excruciating difficulties they are going through as a result of the non-payment of those monies.
Government owes the Ghana Amputee Football Association about Sixty Thousand United States Dollars (USD$60,000) and some Fifty Thousand Ghana Cedis (GHC50,000.00) from expenses made by the team during the Cup of African Nations for Amputee Football (CANAF) in Nairobi, Kenya in 2013 and others during the World Cup in Mexico in 2014.
As a result of these debts, the management of the team is under serious pressure from the players, air travel agencies, caterers and accommodation facilities, who are always on their necks.
Several reminders to the Ministry of Youth and Sports, the Chief of Staff, the Justice Dzamefe Commission and others have yielded no results and the management is using the demonstration to drive home the need for government to settle these outstanding bills to save the Association from collapsing.
The Association, in spite of the challenges, continues to create avenues for the players to travel to Turkey to play professional amputee football to take care of themselves and their families instead of becoming a burden with society, a phenomenon that is associated with disability.
The demonstration would start from the Obra Spot through GBC to the Flagstaff House where a petition would be presented to the President.