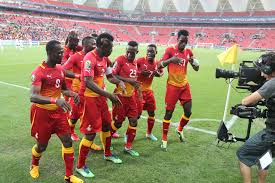 Ghana’s national team will play their 2017 Africa Cup of Nations qualifier against Mozambique in Accra on the unusual day of Thursday, CAF has revealed.
The Black Stars are used to playing their home matches at weekends but the crash qualifiers for the tournament in Gabon look to have forced the change.
The back-to-back clash with the Mambas in the Group H matches mean the Ghana team must travel immediately after the game to Maputo for the second round of games in the group.
This is why the Black Stars will play Mozambique at the Accra Sports Stadium 24 March.
The kick-off time is 3:30pm Accra time, CAF further revealed.
The match is part of the many qualifiers which will be played across the continent as the qualifiers resume this month.
The last qualifier to be played there ended up in a 7-1 win for the Black Stars against Mauritius and it was in the opening match of the qualifiers.
Ghana leads Group H with 6 points from two matches following wins over Mauritius and Rwanda.
Victories in the two matches this month will all but confirm the Black Stars participation in the tournament to be played in Gabon next year.