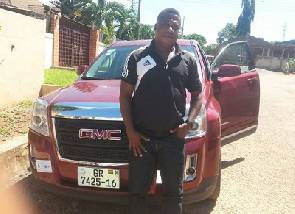 Kwabena Amissah by his new car

President of Ambitious Division One League side Elmina Sharks Football Club, Dr. Papa Kwesi Nduom has presented a brand new GMC Terrain 4-Wheel Drive to the coach of the club, Kwabena Amissah.
The new car will serve as a huge motivation for the coach in his quest to qualify the Elmina based club to the Ghana Premier League.
After receiving the car in Accra, Coach Kwabena Amissah expressed delight at the gesture and promised to give his best to ensure that Sharks realize their ultimate objective of securing qualification in to the Ghanaian top flight.
“I think it [the car] has come at the right time. This also motivates you to work hard. When someone throws a challenge to you, you have to work hard and prove to the person that you deserve what he has given you”, Amissah said.
“I am happy that I have got a car which will make me mobile and try to work hard to achieve success for the employers” he added.
Elmina Sharks have won their first two games of the 2015/2016 GN Bank Division One League and according to the former Berekum Chelsea and Hasaacas coach, his side are working hard to achieve their goal.
“In every organization, you try to progress and then you try hard to go beyond excellence. I think whatever we are putting in place is purposely for the team to make it to the next level of Ghana Football, that’s the Premier League.
“So our objective is to make sure that we train hard, work hard and then move the team to the Premier League” Amissah said.
The Coach further revealed that Dr. Nduom, the President of the club has set a target for the team to finish the first round of the league as league leaders in Zone Two.
Elmina Sharks missed out on qualification after finishing second behind regional rivals Ebusua Dwarfs in the 2014/2015 GN Bank Division One League Season.