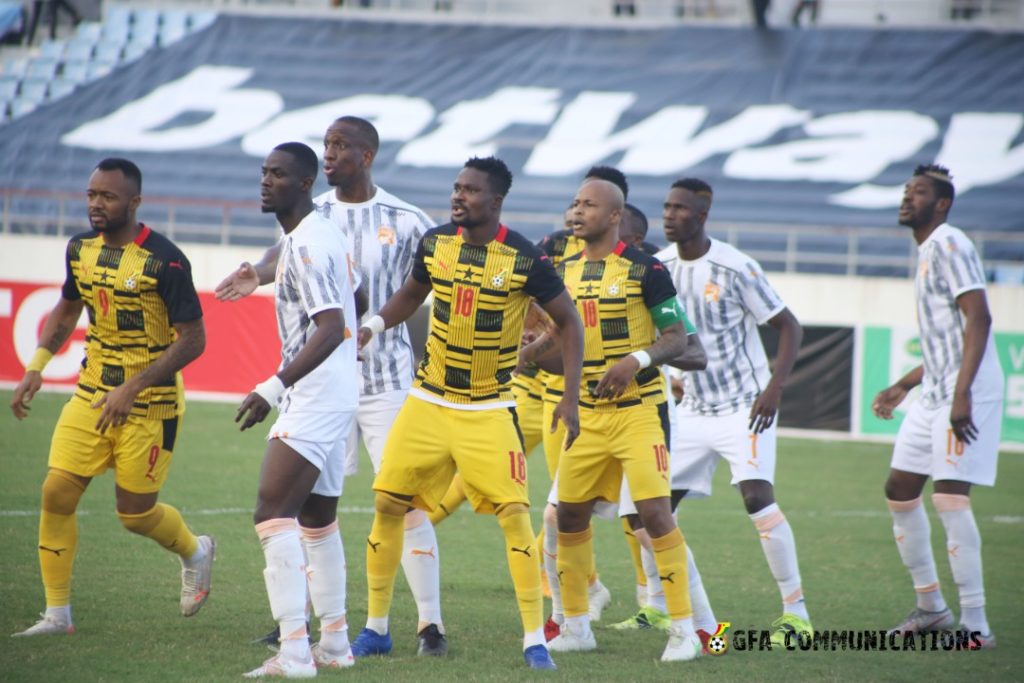 Action from the goalless draw friendly game between Ghana and Ivory Coast in CApe Coast on June 12, 2021

Ghana were held 0-0 by Ivory Coast in an International friendly at the Cape Coast Stadium Saturday night.

The Black Stars made a positive start to the game but the visitors quickly settled to match Charles Akonnor’s men.

Coach Akonnor made changes to the team that lost 1-0 to Morocco on Tuesday. Captain Andre Ayew who was a second half substitute in the first game started ahead of Samuel Owusu – Lawrence Ati Zigi was also put in goal in place of Razak Abalora with Thomas Teye Partey and Baba Iddrisu partnering in midfield.

Playing in front of a good crowed in Cape Coast – Ivory Coast threatened the goal area of Ghana with Sebastian Haller missing the post by inches following a solo effort in the 14th minute of the game.

Thomas Partey fired a ferocious strike which pulled a save from Ivory Coast goalkeeper Slyvian Gbohouo inside 41 minutes.

Moments later, Ivory Coast nearly fetched the opener but Daniel Amartey’s timely header from a Jeremy Boga swinging cross denied the lurking Haller before halftime – as the two teams headed back to the dressing room without a goal.

Back from recess Ivory Coast captain Serge Aurier created the first opportunity by sending in a teasing cross in search of Ibrahima Sangare but Daniel Amartey was on hand to head the ball to safety.

Emmanuel Gyasi was later substituted for Joel Fameyeh while Amad Diallo and Max Gradel came on for the Elephants.

Max Gradel then pulled a wonderful save from Lawrence Ati-Zigi from a free kick minutes before the full time whistle.

Ghana thus finishes the June International window without a win after the 1-0 loss to Morocco on Tuesday.